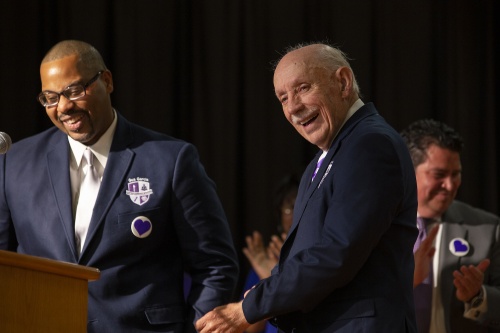 Austin ISD and the Gus Garcia Young Men's Leadership Academy community will have a memorial service Jan. 14 at 9 a.m. for the school’s namesake, Gus Garcia, who died Dec. 16.

Garcia was a community leader who served as the city of Austin’s first Hispanic mayor. He also served on the AISD board of trustees from 1972-78 and was a member of Austin City Council for a total of 10 years, according to a Jan. 13 news release from the school district.

According to the release, AISD Superintendent Paul Cruz; the school’s principal, Sterlin McGruder; Austin Mayor Steve Adler; U.S. Rep. Lloyd Doggett, D-Austin; and state Rep. Eddie Rodriguez, D-Austin, will be in attendance and will speak at the event. Students will also preform and present in Garcia’s honor.