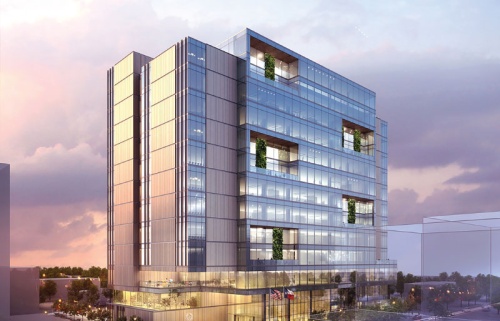 The new facility is proposed to be a 430,000-square-foot urban high-rise building.

Travis County entered into an exclusive negotiation agreement with Travis County Courthouse Development Partners LLC, a team led by Hunt Development Group, on July 10. Using a build-to-suit model, the developers will provide the land—a site between 17th and 18th streets, bounded by Guadalupe and San Antonio streets—and will build the new civil and family courts facility.

“[The development group’s] aim is to provide an efficient, durable and functional design ... that will meet the needs of the judges and citizens of Travis County for the next 50 years,” said Rodney Moss, senior vice president for Hunt, in an email to Community Impact Newspaper.

Initial plans include space for civil judges, clerks and a number of functions related to family justice—including a domestic relations office, office of child representation, office of parental representation and a law library, the developers said.

Following voters’ rejection of a 2015 bond proposal to build a new facility, Travis County Commissioners Court and a citizens advisory committee have examined ways to provide additional civil and family courts capacity. The project is a years-long effort triggered by a 2009 county assessment, which found Travis County lacked “a site appropriate to respond to the current and forecasted demands for the existing civil and family justice system,” according to the county’s website.

The current Heman Marion Sweatt Courthouse was built in 1931 and designed to hold four courtrooms. Currently, the county is operating 19 courtrooms in that space, and county officials estimate 29 courtrooms will be needed by 2035.

“The Travis County civil and family courts project is a landmark project for Texas and the entire social infrastructure industry,” said Stuart Thomajan, founder of Austin-based Chameleon Companies, a co-developer. “Developing a project like this requires a unique group of people with a higher purpose and the right behaviors of stewardship and commitment to the public.”

Negotiations between the developers and the county are expected to last into spring 2019.

County spokesperson Hector Nieto declined to provide an estimated cost while negotiations between county officials and the developer are ongoing. However, he said, the goal is to reduce the $313 million cost associated with the 2015 plan.

More clarity on anticipated costs will be available when a development agreement is finalized in the spring.

The courthouse could be completed by the end of 2022 with move-in expected in 2023, developers said.

“The entire team understands the significance of this generational project to the citizens of Travis County and the trust that the county commissioners and the judges have placed in us to deliver this project on time and as efficiently as possible,” Moss said.