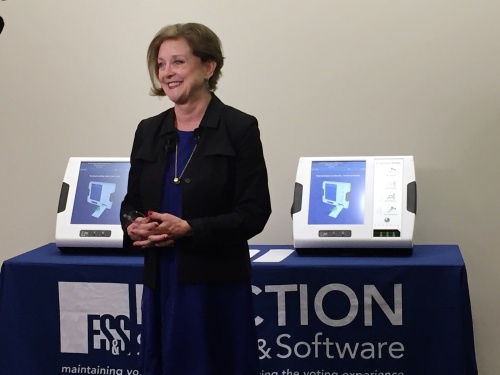 The system is anticipated to be in use for the Nov. 2019 elections, Travis County Clerk Dana DeBeauvoir said. ExpressVote includes a paper trail—a piece of paper the voter can use to review choices before depositing it into the ballot box scanner—a key security feature voters have been asking for, she said.

“I’m very confident that we are buying the very best equipment on the market,” DeBeauvoir said. "It has taken almost 15 years of constant work to get to this point. We picked the best proposer, the best system and also the lowest bidder."

Travis County voters have used the current system—provided through Hart InterCivic—since 2001. In October 2016, the county began accepting bids for a new voting system called STAR-Vote, which was estimated to cost $14 million and last between 10-20 years. The commissioners rejected all proposals for STAR-Vote in 2017, DeBeauvoir said, with the goal of finding a less expensive system that is secure and efficient to maintain.

"This has been a team that has embraced technology that is necessary in uncertain times," said Commissioner Jeffery Travillion. "This team has built a system-based, verifiable, documented approach. Our citizens and our taxpayers can have confidence in that."

Election Systems & Software operates in 145 Texas counties and 43 other states. This system was certified for Texas in April 2017 and allows for early voting and voting on election day, DeBeauvoir said.

With ExpressVote, a voter's experience at the poll will be different than it is today, DeBeauvoir said. The voter will receive an activation card to insert into the machine, called a ballot marking device. Navigation is available on a touch screen—rather than a dial or button. The machine then prints a verifiable paper record, which a voter can check to ensure their selections are accurately reflected. Finally, the voter will insert their paper record into the scanner, effectively casting their vote. The new system is anticipated to be in use one year from now, for the Nov. 2019 election, Travis County Clerk Dana DeBeauvoir said.[/caption]

The new voting equipment—approximately 2,000 booths—will be delivered by spring 2019. A public education campaign to train voters on using the new machines and processes is slated for summer of 2019, DeBeauvoir said.