Can Austin match the needs of a growing senior population? 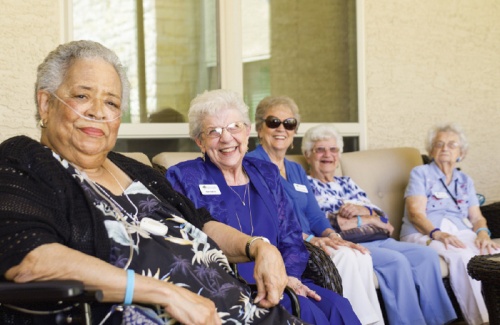 Austin is growing at an unprecedented rate, and so, too, is its population of elder adults.

The numbers are in: Austin is growing at an unprecedented rate, and so, too, is its population of elder adults.

This is acutely seen in South Austin, where the growth rate of seniors has rapidly outpaced the total population growth rate. Between 2011 and 2016, the overall population in the area grew 18 percent while the senior population grew by 46 percent, according to the U.S. Census Bureau’s American Community Survey. Some areas saw an even greater difference, such as ZIP code 78749, where the senior population increased by 62 percent compared to only 7 percent growth overall.

Travis County’s Health and Human Services Department predicts that by 2050 the senior population in the county will triple today’s numbers.

Jannee Briesemeister, chair of the City Council-appointed Commission on Seniors, said many people are surprised to hear Austin is getting older.

“Austin has a reputation of being young and hip, but Austin is aging, and city government and businesses should be more cognizant of that,” Briesemeister said. “We have a lot of concerns about whether the city can handle the growing senior population.”

However, some seniors in South Austin say there is much opportunity for a high quality of life for those who seek it.

In November the American Association of Retired Persons, or AARP, and the World Health Organization designated Austin as an “Age-Friendly City.” However, officials say receiving the designation is only the start to Austin’s commitment to bridging the gaps between the needs of seniors and services provided by the community.


The Cause of Growth

Amy Temperley, coordinator at the Aging Services Council of Central Texas, said people have known this senior boom was going to happen for decades. The baby boomer generation—born between the mid-1940s and mid-1960s—coming into senior age, paired with people living longer today than at any other time in history, created a predictable “double whammy,” she said.

Al Prewitt, a senior who has lived in South Austin for nearly his entire life, said that after his wife died eight years ago he almost moved to North Texas. However, he said he thought better of it after considering what was most important in his life—family.

“Pretty much all my family is here,” Prewitt said. “You’ve got to have some sort of a support group. You can’t always depend on your friends, so your family usually comes first. I figured it would be best for me to stay close.”

Jacqueline Angel, a professor of public affairs and sociology at The University of Texas at Austin, said much of the area’s senior population growth is owed to people like Prewitt who want to stay in their neighborhoods, close to family and age in place.

The desire to remain close to family is a major factor in many seniors moving to Austin as well, said Teresa Sansone Ferguson, executive director of senior support non-profit AustinUP.

“Younger people are moving here and having kids,” Ferguson said. “Their parents are looking at Austin as a desirable place to be, and they want to be closer to their [children] and [grandchildren].”

City of Austin demographer Ryan Robinson coined this the “Grandparent Effect,” and said it lends itself to older people today being more affluent and “footloose.”

Prewitt said he bought his home 47 years ago but could never afford it in today’s market. He has seen several demolitions on his block and said affordable housing is of paramount concern to his peers. He said it is not uncommon for senior living facilities to have a years-long waitlist.

“The Austin market is going crazy,” Prewitt said. “Several people have had to sell their homes. As the population ages, housing is a major concern.”

Briesemeister said transportation poses another major obstacle for seniors, and program offerings are often “over subscribed and require volunteers.” Seniors are less comfortable with smartphone ride-sharing apps, and treks to bus stops can be long and exhausting, she said.

However, in South Austin, seniors like Prewitt and Nancy Crowther say there is adequate and accessible transportation. Crowther, who has used a wheelchair all her life, said the advancements in accessibility for disabled persons over the last few decades have been “amazing.”

Crowther, who lives near Manchaca Road and Stassney Lane, said between well-trained drivers, discounted senior fares, and accessibility for seniors and disabled persons, the services provided by Capital Metro deserves praise. As a member of the AARP Southwest Austin chapter, Crowther said she participates in “Roll and Stroll,” a group of chapter members who take bi-weekly trips around the city on Capital Metro buses.

For those not comfortable using Capital Metro, Prewitt said the local Drive a Senior Network, a volunteer-led, ride-sharing organization for seniors and disabled persons, is another alternative. Prewitt volunteers as a driver a couple times per month, and although his trips are often to doctor appointments, he said the service is available for general mobility needs as well.

Crowther said she sees the biggest problems with seniors who are isolated in their homes and do not enjoy social lifestyles.

“People who don’t go out anywhere and don’t see anything are going to complain about it,” Crowther said. “Isolation is the biggest problem, and we try to prevent that by having all these groups and [encouraging active lifestyles].”

Along with the AARP group, Crowther points to the South Austin Senior Activity Center at 3911 Manchaca Road as providing opportunities for seniors to lead active and healthy lifestyles.

“The positive side is [services are] there for the taking,” Crowther said. “But if you don’t know about [all the opportunities] then it can be harder.”

Temperley said the needs of the senior population are not going away, and with the continued growth expected over the next few decades, the community needs to keep its focus on the issue.

“We need city infrastructure for the [entire human] lifespan, not just for [children] and middle-aged adults,” Temperley said. “It’s for all of us. We’re all getting older. The better we make it now, the better it is when we all get there.”

Austin received its “Age-Friendly City” designation last November after publishing a report and action plan. The documents outline the city’s commitment to its aging population through the eight “domains of livability” put forth by the AARP and World Health Organization.

Briesemeister said the plan’s implementation is in its infant stage, and a central focus in 2018 will be developing ways to collect data on services to seniors.

Michelle Neumann, an administrator at local memory care facility Silverado at Onion Creek, said the staff is working to create a partnership with the city of Austin to offer dementia training to local firefighters.

Neumann said she believes a partnership with the city could earn Austin a designation as a dementia-friendly city.