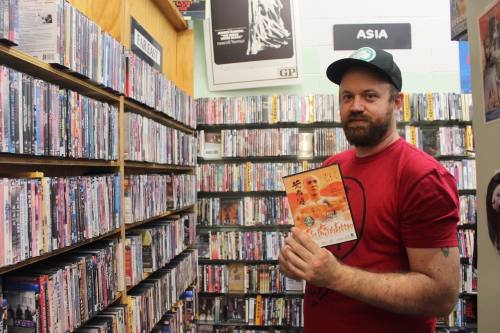 When Vulcan Video first opened its doors in 1985, the home-video industry was booming, and mom and pop rental stores like Vulcan were setting up shop all over Austin, according to General Manager Jacob Knight.

Now, after weathering the rise and fall of Blockbuster and the emergence of streaming technology, Vulcan is one of only two locally owned video rental stores in the city.

Maintaining business in the face of new technology, however, has not been easy. Vulcan was forced to vacate its iconic location on Elizabeth Street several years ago when the property was sold for redevelopment, Knight said. The Russell Street location is Vulcan's last, and recent rent hikes coupled with declining business put the store in a financial bind, according to Knight.

In May, Knight and Operations Manager Matt Taylor started a GoFundMe campaign to help Vulcan maintain business through the end of its current lease and included an open letter about the store’s value to the community on the page.

“We wanted to remind people that we’re still here and we still want to be of service to Austin’s film community,” Knight told Community Impact Newspaper. “We put out the bat signal, except with two Vs flying through the air instead of a silly cartoon bat.”

Knight said he believes stores like Vulcan are community hubs, offering an experience streaming brands like Netflix do not.

“It’s a place where people can come together and find their own strange family members,” Knight said. “You can’t talk to the algorithm [that Netflix uses to suggest films]. You can talk to the guy behind the counter.”

Knight said Austin’s film community is deeply interconnected. Some of Vulcan’s customers work for the Austin Film Society and Alamo Drafthouse Cinema, while others are the average film lover, he said.

Many Vulcan customers also rely on staff’s knowledge to navigate the store’s stock. Vulcan offers an expansive archive of titles on VHS, DVD and Blu-ray, from obscure 1980s slasher pictures to the films of foreign auteurs to cult classics and new releases. Some of the titles were never distributed on DVD or streaming sites.

“Without places like this, those kinds of films die,” Knight said

The response to the GoFundMe has been greater than Knight could have imagined, he said, with over $26,000 raised in the first 30 days.

“The best case scenario is that this gets rediscovered and reaffirmed as part of the Austin cinephile community,” Knight said. “After the wave of support we’ve received, it’s hard to feel anything but hopeful for the future.”