One year in, Belterra Village continues to bring services to W. Hwy. 290 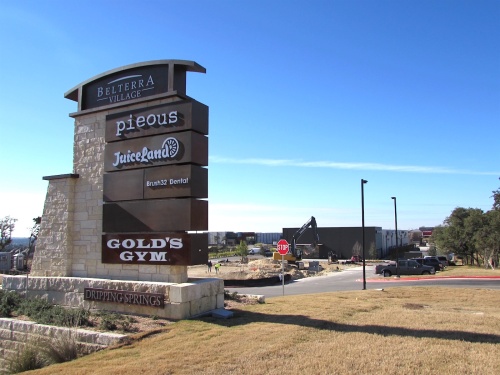 Twelve additional tenants are already confirmed for the future. At completion—scheduled for within the next two years—the development will include 200,000 square feet of commercial space, 76 single-family homes, 215 multifamily units and a Hampton Inn & Suites, according to Daniel Campbell, a principal with developer Endeavor Real Estate Group.

“The goal all along has been to provide a significant amount of supply to an area that didn’t have a ton of services,” Campbell said. “[Area residents] were driving 8 miles away or more for some of the services we’re now providing.”

Bridget Wolfe, a resident of the Ledge Stone community located less than a mile from Belterra Village, said that while the development was not a main reason she moved to the area, her family feels lucky that it has been so convenient to use.

The property was annexed by the city of Dripping Springs before the development was proposed, and Kimball said sales tax from the businesses go to the city. For residents living in Dripping Springs, that means Belterra Village’s businesses could help bolster improvement projects elsewhere in the city.

Some longstanding local businesses around Dripping Springs might feel a squeeze due to the increased competition from Belterra Village, but Kimball said she believes the businesses in town will benefit overall.

“It’s drawing more customers this way to potentially spend money here, which will make the economic environment more robust,” she said. “People will still be coming to Dripping Springs.”

Belterra Village is likely a convenient option for services such as dental and haircut appointments, working out and entertainment for residents living southwest of Austin. Residents with the greatest access may come from the Belterra community, made up of 1,900 single-family homes starting at Belterra Village’s southern property line.

“A lot of people use the Gold’s Gym, and I see really good posts [online] about the restaurants and how good the food and service is,” said Rick Huner, Belterra Home Owners Association president. “People are pretty excited to learn about [upcoming tenants]. Residents like having different choices.”

Genevieve Richardson, a resident of the Hills of Texas development on RM 1826 between Dripping Springs and Circle C Ranch, said she goes to Belterra Village three to four times a week to work out at Club Pilates. She said the location is much closer than the South Austin gym she used to frequent on William Cannon Drive. While there, she sometimes stops into the UPS Store, Breed & Co. and Belterra Village’s restaurants.

Wolfe said that since moving her family has eaten at every restaurant at Belterra Village. Her family has also shopped at Breed & Co. for hardware supplies and at other stores, she said.

“We were used to having things very close to us,” Wolfe said. “So far we really haven’t ventured out [away from the area] much because we haven’t had to.”

Kimball also pointed to Sky Cinemas as a business that could attract customers from across the region. Belterra Village restaurants readily available in Austin, such as Torchy’s Tacos, attract people who live north or west of Dripping Springs that may not drive to Austin frequently.

However, while pleased with what is offered at the development, Richardson said she would like to see more mom and pop stores in the area as opposed to chains that are abundant in Austin.

“It’s not yet a destination,” she said. “I think this area is such a neat community and we need some businesses with personality, not just the chains.”

Becoming part of the community

Kimball said at least 10 businesses in Belterra Village have already become members of the chamber of commerce. However, many that have not yet joined are already partnering with community organizations and Dripping Springs ISD to get more involved in the area, she said.

“The businesses came here to be part of this community,” Kimball said. “Many are locally owned and are invested in the area.”

The Switch, a restaurant concept from the Stiles Switch Barbecue team in Austin, opened at Belterra Village in June. Catherine Stiles, one of the restaurant’s owners, said Dripping Springs’  fast population growth attracted the business to Belterra Village.

However, she said she knows the restaurant “has to be a good neighbor” to be accepted by the community. That includes partnering with local organizations and collaborating with other Hill Country businesses to fundraise, host events and more.

“We have to get involved in the community to let people know what we’re trying to do out here,” Stiles said.

Huner said an important reason residents have accepted Belterra Village is that the development gives the community benefits other than being a retail option. Partnerships with community organizations and sponsorship opportunities have come from the new businesses, he said.

Belterra Community Manager Luke Kenzik said the HOA has partnered with some businesses, such as Gold’s Gym, to give residents discounts. They have also hosted community events at the local restaurants and Sky Cinema, where residents can drink, eat and find entertainment, he said.

“[Belterra Village] presents partnerships, and we’re looking to do more social things there,” Kenzik said. “That’s an objective [for the community].”

For Stiles, she said running a business to fit into the Texas Hill Country presents different challenges than within the city of Austin.

“Our original restaurant has such a local following and has been a destination for travelers and tourists, so in Austin we get people from all around, and there’s a constant busy flow,” she said. “We’re seeing out in Belterra Village it’s a little bit of a slower pace.”

Stiles said Austin customers wanting to try The Switch typically wait to visit on a weekend. Traffic along Hwy. 290 and the 20-30 mile distance from the center of Austin likely deter customers from visiting during the workweek.

“During the week it’s mostly customers from the community,” she said. “We’re a new business, so we’re growing, but we have a very supportive community out here.”

Unlike the Austin location, The Switch features a full bar and a dining room that can be rented out for events such as weddings, specifically created to cater to Hill Country clientele. Stiles said those aspects make The Switch more of a “destination” where customers could spend an extended amount of time.

More on the horizon

As of Dec. 10, Endeavor had announced 12 additional tenants, some of which could move into the development in 2019. The group of upcoming tenants includes five new restaurants, a barbershop, a jeweler and a pet store. Additional spaces are still available.

Chick-fil-A is expected to open Jan. 10, while restaurants Ginger Sushi and Simply Pho House both began moving into units in December, Campbell said.

Kimball said. The increased health care options around the Dripping Springs area should attract people to the city, she said.

Campbell said when the development is completed will depend on leasing and other factors out of Endeavor’s control. However, he said he was confident it would be finished within the next couple of years, if not sooner.

“We’re really rounding third and getting close to completing it,” he said.  “It’s been a joy to see our vision come to life over the last year.”