Neighborhood coworking on the rise in South Austin 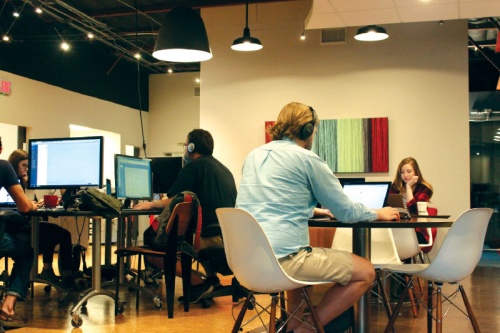 Fibercove, which launched in 2015, was one of the first Austin-area coworking spaces south of the river.

Freelance marketing consultant Dorothy Garbe rents a desk at a coworking space, The Hive, on Old Manchaca Road. On a recent Thursday morning, she created a multimillion-dollar pitch while 1 1/2 year-old-son, Roger, bounced on her knee.

“I’m working at an executive level in my tennis shoes,” she said. “I think people would be surprised at the careers that are happening [at The Hive].”

Down the hall from Garbe, Allyson Davidson, a mom and a process engineer in biotech, wrote a report for a cell therapy company. Meanwhile, Waziri Garuba, small-business owner and dad of three, produced a video.

Garbe, Davidson and Garuba are South Austin parents, remote workers and business owners. As their careers matured and their families grew, the traditional coworking model no longer met their needs.

“I know the appeal of working downtown, but it brings traffic and unnecessary expenses,” Garuba said. “There’s an arrogance about [trying to be] cool that I got rid of when I moved south.”

A new trend of neighborhood coworking is emerging in South Austin, tailored to the suburban workforce. As it stands, there are approximately 60 coworking spaces in the Austin metro. While none were located in South Austin prior to 2014, six have since opened, indicating a growing trend.

The future of coworking

Coworking is not a new concept. Starting in 2008, shared workspaces have cropped up downtown and in East Austin. While South Austin has been slow to the scene, it now offers future coworking possibilities.

“In 20 years, neighborhood coworking won’t be a new idea,” Garbe said. “It will be the norm.”

The concept is not only “culturally cool” but a smart business strategy, she said. As millennials mature in their careers and move to the suburbs, the demand for this type of coworking will continue to grow. Neighborhood coworking offers solutions to problems employers are trying to solve, including retaining parents and providing part-time child care.

“A wave is coming,” Garbe said. “South Austin could be at the forefront of the future of coworking.”

“There’s a major renaissance happening in South Austin coworking,” said Jill Dretzka, founder of Work and Woof, a coworking space that offers a playscape for dogs. “Here, coworking is getting niche. We’re less like the [corporate chains] and more amenity-driven.”

Dretzka moved to Austin from Chicago and soon after adopted Luca, an Australian kelpie. Unable to afford a coworking membership downtown plus the expense of dog daycare, Dretzka worked from home for about a year before devising a plan that became Work and Woof.

“Everyone I know in Austin has a dog,” Dretzka said. “I sort of thought someone would come up with this idea sooner or later. I had to do it first.”

Work and Woof—which opened in June—offers dog owners the ability to bring their pet with them as they work each day.

Many traditional coworking spaces offer networking events for members. But Friday happy hour looks different for suburban parents. Davidson, a coworking member at The Hive, said she and her children are regulars during the work day and attend after-hours events at the venue as well.

“We’re here every Friday for bounce house night,” she said. “The backyard is fully fenced in, so it’s toddler free-range time. The parents sit back and drink a beer while their kids play together.”

Almost half of the nation’s workforce—45 percent—spends at least some time working remotely, according to a 2017 Gallup poll. The number is predicted to continue to grow as businesses rethink concepts of work.

“Corporations are actually moving away from having everybody suit up and show up and come into the office,” said Kay McManus, founder of Scale Up CoConnect. “It’s not just millennials who are looking for space like this. Jobs are changing. Work is changing.”

Scale Up CoConnect was designed for entrepreneurs and freelancers with mature careers, she said. As a neighborhood coworking space, it caters to the demographics of South Austin—senior-level careers—rather than the tech startup scene downtown.

Felicity and J.P. Maxwell co-founded Fibercove in June 2015 as one of the first coworking spaces south of downtown.

“We wanted to have an office space closer to our home,” Felicity Maxwell said. “We were commuting across the river every day, and traffic was terrible.”

The majority of Fibercove’s 75 members live in South Austin, she said. A short commute and plentiful parking are key reasons the members say they choose to cowork close to home.

“Having more options for workspaces closer to where people live hopefully means workers can significantly shorten their commutes, or even use options like biking, transit or walking to reach their office space instead of driving already-clogged roads into the downtown area,” said Lisa Kay Pfannenstiel,  executive director of Movability, an Austin-based transportation management association.

In fact, if every Austin employee shifted driving habits one day a week by working closer to home or taking alternate transportation, congestion would decrease by 20 percent, she said.

Waziri Garuba, one of The Hive members, said he chose neighborhood coworking to limit his daily drive to three minutes after moving to Austin from New York City.

“Traffic is non-existent,” Garuba said. “I don’t know what traffic is anymore. Why should I waste two hours trying to get to a space to grow my business?”

New to Austin, new to motherhood, graphic designer Shelley Delayne said she felt disconnected from the local community when she moved to town. Working from home was no longer effective for her, she said, and she decided to create a collaborative space for others in South Austin. Delayne founded Orange Coworking in 2015.

“Technology is a beautiful thing,” Delayne said. “Being able to work from anywhere is amazingly freeing, but it also means human contact is optional.”

Orange Coworking has an average of 120 monthly members throughout the year. From freelancers to founders of startup companies, most live in South Austin, Delayne said.

“This is my neighborhood,” she said. “These are my people. There’s so much good that comes from being around other people who care about you.”