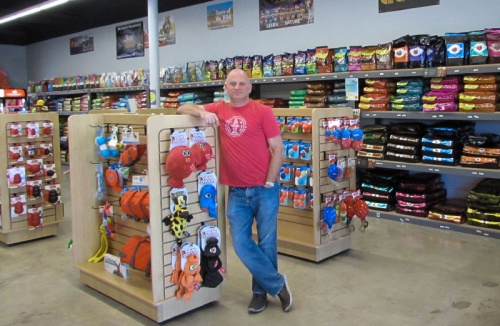 A locally owned business with locations on Manchaca Road in South Austin and Anderson Lane in Central Austin, Lofty Dog has a staff that can help pet owners find which pet products are right for them, owner Jon Michelson said.

“We are all pet owners, and we care about everyone else’s pets too,” said Michelson, who owns a 120-pound Swiss mountain dog named Mike. “The main reason people come here is because we provide a level of service that we think is not matched.”

A former restaurateur who opened Leaf in Austin 10 years ago, Michelson joined Lofty Dog as a co-owner when the business wanted to expand from its original location in downtown Austin, he said.

The founders sold him the company after opening the Anderson Lane location in 2012. The downtown location closed soon after, but Michelson opened the Manchaca location in May 2017, he said. The new store is something he hoped for from the beginning.

“The most important thing was having the team in place that would allow me to open another location and know the north store could continue to function the way it should,” he said.

Michelson said both locations offer locally made products, such as pet collars, accessories and baked dog treats. They also have traditional pet products like food and toys. Hemp-based CBD treats, oils and ointments have also become popular over the past year.

While 95 percent of Lofty Dog is dedicated to canines, the store offers products for cats, including litter, food and cat trees. Michelson said the split in the store represents the needs of the pets.

“Dogs probably need 95 percent of our attention but cats don’t need a lot,” he said. “Cats need to be fed, need their litter changed, and some like toys.”

The store is “pet-friendly,” and Michelson said customers frequently walk in with animals, including dogs, cats, hogs, birds and reptiles.

On the third Thursday of each month, the South Austin store hosts “poochinis and pedicures” from 6-8 p.m. The event offers donation-based dog pedicures, with proceeds going to area animal rescues, Michelson said. Tito’s Vodka supplies drinks to owners as they wait for their pups to be treated, he said.

Other events, such as pet adoption days, are promoted on the business’s social media accounts.
SHARE THIS STORY