Over the past nine months, local residents have adjusted to frequently shifting health guidelines, changes to city services and shuttered businesses resulting from the ongoing coronavirus pandemic. For people experiencing homelessness, the consequences of closing public facilities and resources have been especially severe.

Sunrise Community Church in South Austin has seen the daily demand for its homeless resources at times more than triple during the pandemic, Director Mark Hilbelink said. At the summer’s peak, over 700 individuals were visiting the church each day seeking food, access to restrooms and help finding housing, compared to 200 per day pre-COVID-19.

Hilbelink said he believes the number of individuals experiencing homelessness in Austin has increased since March, and the situation could get worse in the future as local evictions protections expire at the end of the year and unemployed rates remain three times higher than in 2019.

Additionally, Hilbelink said the homeless community has become more visible this year after Austin decriminalized camping in certain public spaces in 2019. Tent communities can be found across Austin, including under the Ben White Boulevard overpass in South Austin and along Lady Bird Lake downtown, which Hilbelink said indicates a growing need in Austin.••“I think that visual has been kind of a shocker for a lot of people,” he said.

As businesses and resource centers downtown closed, some individuals experiencing homelessness have left the city center, creating a population that is more dispersed into pockets throughout North and South Austin, Hilbelink said.

“What happened during the height of COVID is that the agencies that are really leading the way are the smaller, faith-based or community nonprofits,” Hilbelink said.


Resources out of reach 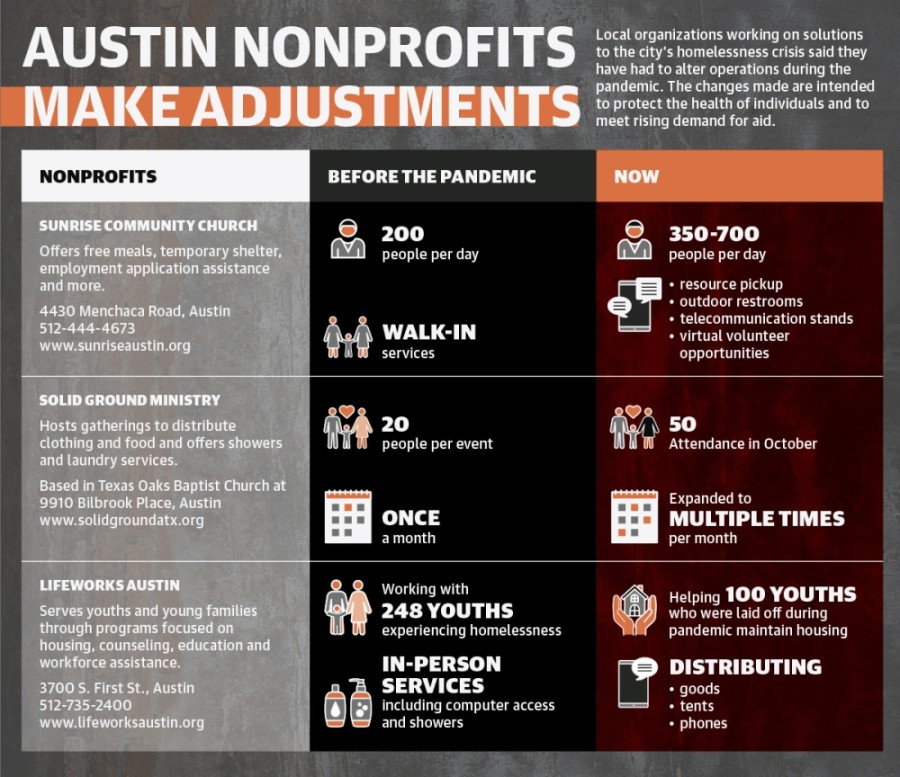 Julianne Hanckel—a spokesperson for nonprofit Lifeworks, which offers programs to youths and families experiencing homelessness—said traditional options for shelter and for internet access have shut down or been altered to follow health guidelines.

“Places that might get them out of the elements or might allow them to connect to Wi-Fi to check emails—that rug was pulled out from underneath them when everything shut down,” she said.

Opportunities to earn money have also been limited. Panhandling, which Hilbelink said is a major source of income for many experiencing homelessness and can bring in $25-$40 per day, has been less fruitful this year because the volume of traffic in Austin overall has decreased.

Carlos Sandoval said he was working and off the streets for four years before becoming homeless again in March and settling in South Austin. What he expected to only last a few weeks has stretched beyond eight months as the global health crisis has made accessing assistance and employment opportunities more difficult.

“I got myself out of the situation because I woke up one day and saw my fiancée shivering, freezing cold on the floor,” he said. “Now, I’m back and can’t even get any help because of the pandemic.”••Sandoval said finding employment was near impossible when service-industry businesses closed in March. Even manual labor jobs—which, in the past, were an option to make $80-$100 a day—disappeared, as the homeless community was labeled as an at-risk population that could carry COVID-19.

Sandoval said people he knows have continued to apply for government assistance, including food stamps, unemployment benefits and emergency housing. But as non-homeless individuals lost jobs, the applicant pool for resources expanded, which pushed many without mailing addresses or without the resources to follow up with applications to the back of the line.

Hilbelink said the biggest challenge to emerge related to COVID-19 is access to mobile technology. Health concerns have shifted medical offices to offer more telemedicine appointments, which has led to lapses in medical coverage.

“If you don’t have a phone or you don’t have a tablet, you go from seeing a doctor to nothing,” he said. “The mental health system for homeless people is extremely difficult to access normally, and for the homeless community that can’t just shift to telemedicine, that basically means they’re screwed.”

Affordable food has also become more scarce. Hilbelink said nonprofits rely on donations of precooked meals from catering companies and local restaurants, many of which have struggled to stay open or have stopped donating this year.


A shift in service 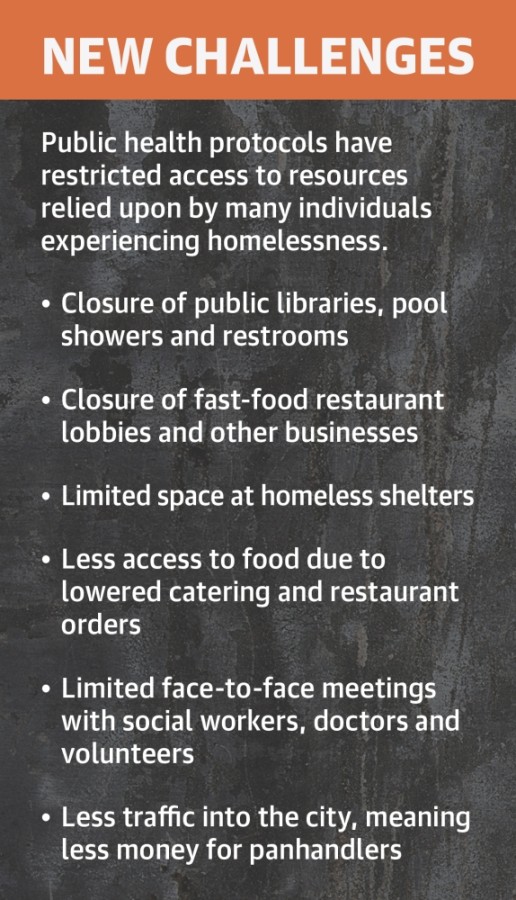 Trotter said the organization hosts events, at which they distribute clothing and meals. By partnering with nonprofit Lighter Loads ATX, they have also been able to offer showers and laundry services.

“We have had some people that have become homeless due to the pandemic, and it definitely serves as a reminder that we’re all just one step away from being in that kind of situation,” she said.

Hanckel said that for many experiencing homelessness, consistency of service and direct contact with case managers is a big part of finding permanent housing.

“We lost that opportunity to do that in-person, one-on-one work, so [Lifeworks] gave our clients cell phones or laptops,” she said.

Hanckel said Lifeworks has also had to modify their resource centers from walk-in facilities to distribution sites this year, passing out tents, hygiene supplies and clothing, she said.

Sunrise Community Church has also shifted its model and is now providing stations with tablets that can be used by individuals who have virtual appointments, Hilbelink said.

Decriminalizing camping has made the community more accessible for organizations, Ending Community Homelessness Coalition Executive Director Matt Mollica said. Without the threat of having to move or relocate, individuals are more able to locate.

“If we were criminalizing homelessness right now and people were back into the peripheral of our community here, it would have been much harder for us to bring hand-washing stations to them and shower trucks to them and laundry trucks and outreach supplies and connect them to primary care [and] get them into the hospital if they have symptoms—all those things that probably have saved a lot of lives here during the pandemic,” Mollica said.

City of Austin officials are working to divert 19% of Austin’s non-sheltered population into permanent housing.

In April, the city approved the creation of lodging shelters in hotels for qualifying individuals who are vulnerable to COVID-19 and need housing assistance. It also created isolation facilities for any Austinites who have been exposed to COVID-19 and need a place to quarantine away from others. In total, 538 people experiencing homelessness have stayed in the shelters this year, a representative from Austin Public Health said.

When the shelters—leased with CARES Act dollars— eventually close, some members of Austin City Council are determined to keep 300 formerly non-sheltered individuals from returning to the streets.

“This is not the only group of people we need to be focusing on who are experiencing homelessness, but it is a group of people on the path to housing we do not want to end up on the streets,” Council Member Ann Kitchen said at an Oct. 27 Austin City Council work session.

Olivia Aldridge contributed to this report.