Austin’s push to address its homelessness crisis continues this spring as a focus on the city’s reinstated public camping ban and its enforcement rose alongside discussion of the long-term path toward housing its unsheltered population.

More than 57% of Austin voters elected May 1 to reinstate criminal bans on camping in public, sitting or lying down on sidewalks, and panhandling downtown. While those on both sides of the election agree that housing the homeless is the ultimate goal, leaders with the Save Austin Now political action committee behind the effort to pass Proposition B said they acted in response to concerns surrounding City Council’s 2019 camping ban rollback.

“This is a sign that a majority of Austin residents decided that they wanted to take their city back. That they just want a safe and clean city for everyone, the residents and the homeless. This policy has been an epic failure,” Save Austin Now co-founder Matt Mackowiak said on election night. 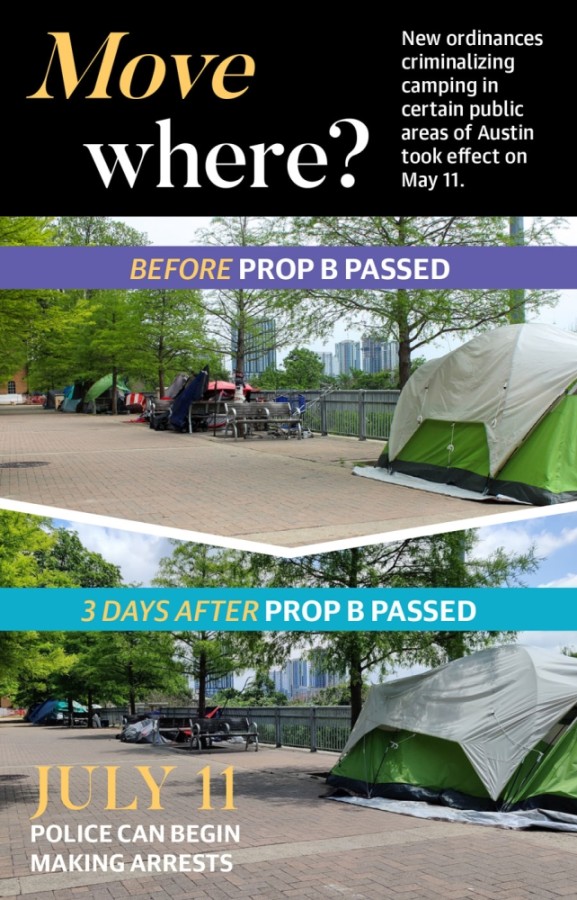 The measure to reinstate Austin’s homelessness ordinances generated back-and-forth discussion and hundreds of thousands of dollars spent leading up to election day. And after voters’ directive to eliminate public camping, panhandling and sitting or lying down went into effect in mid-May, a need for temporary housing emerged even as civic plans to permanently house thousands of the city’s homeless continue.

“There’s nowhere for them to go,” said Matt Mollica, executive director of the nonprofit Ending Community Homelessness Coalition. “I just think about what kind of position to be put in, for someone to say, ‘You can’t stay here.’ And you ask them, ‘Where do I go?’ And they don’t have an answer for that. It’s just really unjust and unfair.”

In addition to Save Austin Now leading the Proposition B effort, passage was also supported by business advocacy groups such as the Austin Chamber and Downtown Austin Alliance, which cited economic fallout from the city’s previous homelessness policy. Jessica Price, owner of the downtown massage studio AustinDeep, said hers was one of many businesses negatively affected by the city’s loosened ordinances.

“If you don’t live downtown or are not running a business downtown, you’re a little bit more removed from it, so it’s easier to say, ‘Have a heart,’” she said. “It’s been a big deal for the past two years. ... My hope would be that we can [house] homeless people and give them the care they need.”

Proposition B critics expressed concern over the measure’s lack of housing solutions in favor of penalization, saying it could cause potential setbacks for those seeking housing, social services or employment.

The unsheltered population’s visibility was also sustained over the past year due to pandemic guidance advising officials against clearing out encampments. Mollica said that policy was a positive for nonprofits and other groups geared toward homeless outreach and support who found it easier to connect with clients on a regular basis, although that benefit may be lost if those experiencing homelessness are forced to move.

With new ordinances came the announcement of a phased approach to enforcement starting with weeks of education before citations, arrests or camp cleanups come into play this summer.

In a May 11 press conference, officials including City Manager Spencer Cronk stressed the need for a “safe and humane” approach aimed at diverting those experiencing homelessness away from jail. That announcement prompted Proposition B proponents to speak out against what they say is a lack of urgency in implementation.

“The city has had two years to address this problem, and all they have done is make it worse ... Disrespecting the will of the voters in this way is a ‘slap in the face’ of the nearly 91,000 Austinites who demand their city become safe and clean again for everyone,” Mackowiak and Save Austin Now co-founder Cleo Petricek said in a May 11 statement.

To address the imminent displacement of residents at unregulated campsites, council in early May unanimously moved to explore opening city-sponsored, regulated campgrounds. Cronk, who is expected to report back to council with further details on designated camps through the spring, also said a “broader spectrum” of immediate housing options are under consideration.

Staff released a preliminary list of 45 city-owned properties that could house regulated camps May 18, which included several parks and recreation centers. Some council members expressed apprehension about inclusion of those facilities on the list, which staff will likely refine through community feedback this spring. A second staff report on the topic is due to council June 2.

Council and staff also stressed that sanctioned camps are not a permanent solution. Community First Village and its planned 1,400-micro home expansion has been referenced by both Save Austin Now and city officials as a piece of the housing puzzle. The East Austin master-planned neighborhood managed by nonprofit Mobile Loaves & Fishes currently offers housing for more than 220 residents leaving chronic homelessness, and its future phases are expected to begin development in 2022.

Council members and business and community leaders this spring have touted a new plan to permanently curb homelessness in Austin.

Stemming from a March and April stakeholder summit came the plan to ramp up local services, bring more than 3,000 Austinites off the streets and secure over 1,000 new housing units for the homeless by April 2024. In addition, the summit plan calls for establishing a permanent framework to quickly connect those entering homelessness with rehousing resources.

“The more we got into discussion, the more buy-in we got,” said Laura Huffman, president and CEO of the Austin Chamber. “Like a lot of complicated issues, one of the big things that had to happen was people had to ... agree that this was a complex problem and it was going to require a big set of solutions.”

Even with backing from city officials and members of the business community, much of the summit plan’s funding has yet to be secured. With an estimated cost of $515 million to house those 3,000 individuals, around $222 million—just over 43%—of the plan’s scope is tied to expected funding from local and federal sources.

That gap, and the plan’s broad goals, have led summit participants to push for outside contributions as rehousing milestones approach; the plan calls for 100 people rehoused through June and 400 by the end of this year before ramping up through 2022-23 as operations are solidified.

“We still have a long road ahead of us if we want to create a city where homelessness is brief, nonrecurring and rare,” District 10 Council Member Alison Alter said May 6. “The summit has no impact if folks beyond the city don’t join us in these efforts.”