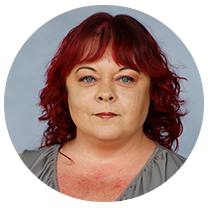 Members of Central Texas Interfaith gathered at the meeting in opposition to the Chapter 313 agreement. (Amanda Cutshall/Community Impact)

Austin ISD trustees met Nov. 9 to discuss a possible Chapter 313 agreement with NXP Semiconductors, which has locations in Southwest and East Austin.

The state's Tax Code Chapter 313 value limitations allow businesses to enter into agreements with school districts to limit how much property taxes they pay for a set amount of time. The applicant agrees to build or install on a property and create jobs in exchange for this limitation.

The agreement would reduce the amount of taxes the company pays and allow the district to keep about $75 million the district would otherwise lose to recapture over a 10-year period, said Jacob Reach, chief officer for governmental relations and board services, during the informational meeting.

"The way it would work is, basically, NXP would be saving money on taxes over a 10-year period," Reach said. "The company would have a value limitation for the city of Austin at $100 million. So, let's say–hypothetically–they build a $1.6 billion property, they would be taxed as if it was a $100 million property for maintenance and operations, [M&O], purposes over the 10-year period. So, the company is basically saving a lot of money and will be splitting that savings with the district. They would pay about $75 million for the two buildings throughout the 10 years. And, because it's from an outside source, it's not subject to recapture by the state."

Reach said this would not hurt other school districts.

"It would have no effect on any other district in the state, because we're talking about dollars that don't exist right now," Reach said. "So nothing is coming to the state at this moment. It would only come to the state if they build, but NXP will only build if they get this Chapter 313 agreement."

Reach said NXP is pursuing the agreement because it is trying to receive federal dollars, which requires local partnership.

"Basically, NXP is saying they will build elsewhere if they don't get the agreement," Reach said.

Chris Grammer, a partner with Culwell Consulting who was hired by AISD, said if approved, funds coming in can be used as a benefit for teachers and staff, for school programming, and for affordable housing in partnership with existing community partners. He said the tax break will not cost the district more money.

"The school district will not be financially harmed in any way," Grammer said. "The additional revenues are not recognized by the state and are therefore not subject to recapture."

Not everyone in the district is in favor of the agreement, though. Dozens of people spoke during a prerecorded public comment session–some in support, but most in opposition–of the Chapter 313 agreement with NXP. Those concerned, many of whom said they are members of nonpartisan organization Central Texas Interfaith, said they were worried about the agreement resulting in the district “giving handouts to big corporations.”

“While we want economic development and good jobs in Central Texas, these agreements prohibit school boards from enacting high living wage and worker safety standards as part of these agreements, unlike city and county incentives, in which good job standards can be negotiated,” said Carlota Garcia of the Central Texas Interfaith organization.

Garcia said these agreements are “Texas’ largest corporate welfare program, which costs taxpayers over $1 billion annually—money that could be going to public schools and other public needs. The state must replace the revenue that the corporations get out of paying in property taxes for 10 years by collecting more taxes from all Texans.”

According to the Texas Comptroller of Public Accounts, NXP has put in two applications for the potential of two separate, new developments both located within the boundary of Austin ISD. Per the terms of the proposed agreement, in addition to job creation, the company would be required to maintain a viable presence for five years after the 10-year tax limitation period is complete. After that period, the project becomes fully taxable for M&O purposes.

AISD District 9 Trustee Ofelia Zapata wrote she would not support the agreement in a letter that was read by Board President Geronimo Rodriguez Jr.

"Our job as a school board is not to figure out which industries we should subsidize. ... I firmly believe that draining money from our system to benefit corporations hurts my students," Zapata's letter said.

The letter expresses concern about the district's role in providing companies economic incentives and an inability to build district proprieties, such as safeguards for the safety of construction workers, into the agreement.

The board of trustees will reconvene and possibly vote on the agreement at its Nov. 17 meeting in the AISD board room, 4000 S. I-35 Frontage Road, Austin, at 6 p.m.

Amanda joined Community Impact Newspaper in October 2022. She graduated from Texas A&M University in May 2015 and has been in the news business ever since. In her downtime, she enjoys listening to music, loving on her pack of dogs, and spending time with her wife.