Whether it is people looking to “git out” of downtown Austin or “git out” and meet new people, owner Nate Kinney said The Git Out Bar + Kitchen has seen great support from the South Austin community in its first year.

The Git Out opened on South Congress Avenue on July 11, 2019, offering the one-on-one service of a sit-down restaurant with a fun bar atmosphere, Kinney said. The restaurant menu includes classic pub grub such as chicken wings, loaded nachos, burgers and sandwiches as well as a selection of empanadas, mac and cheese bowls, and a full selection of beers and craft cocktails. 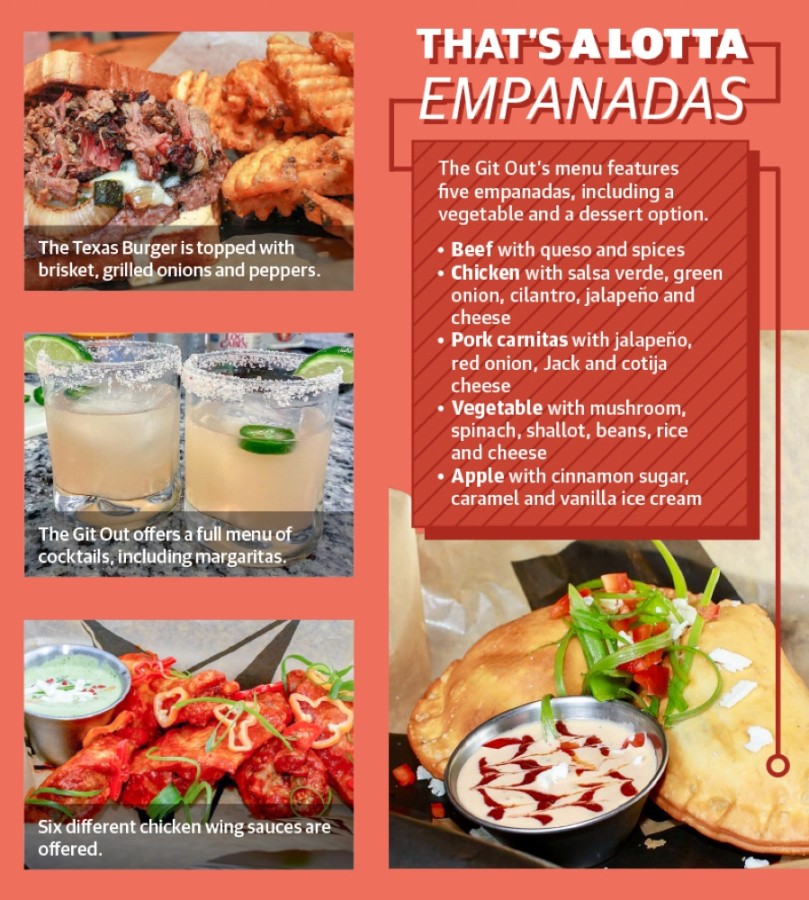 Kinney, who was born in North Texas and moved to Austin 16 years ago, opened the restaurant with his business partner, Tony Villegas, who has been in Austin for 50 years. Kinney said the duo had worked together on other Austin spots before opening The Git Out, including El Mercado, and that the new South Austin venture was inspired by their Southern roots.

“Being born in Texas, the name’s got that Texas twang,” he said. “I’ve heard people say ‘git out there’ and ‘git out of town’ my whole life.”

Kinney’s Boston Terrier, Solo, was also the inspiration for The Git Out’s logo, and Solo has become the business’s mascot.
RELATED STORIES

Although the original goal of the restaurant was to invite people to get out of their homes and have fun in the neighborhood, Kinney said his team was able to quickly shift to offering to-go and delivery during the coronavirus pandemic. The restaurant is also open to dine-in seating in a limited capacity.

He said the restaurant was not able to have as big of an impact as it had hoped in its first year due to the pandemic, but the community has continued to stop by while following current health guidelines.

“Our immediate local community has been extremely supportive,” he said. “We’ve sold shirts and other things, which is not enough to save a business, but it is encouraging for us to see how much our neighbors have supported us and how much the area needs a neighborhood bar to thrive.”
The Git Out Bar + Kitchen Southwest Austin Dining
SHARE THIS STORY