A field of Firewheels and other Texas wildflowers blooms in spring 2019. (Nicholas Cicale/Community Impact Newspaper)

Each year beginning in late February and early March in Central Texas, a variety of native wildflowers begin to bloom with thousands of species active across the state. Wildflowers can be found in open fields, along local roads and highways, and at local parks.

While wildflowers are present every spring, the amount of blooms and length that they stay vibrant can vary each year depending on weather. According to Andrea DeLong-Amaya, the director of horticulture at South Austin’s Lady Bird Johnson Wildflower Center, spring flower blooms typically last into May but can sustain through June. A colder winter can push back blooming, while spring rain can help extend the season into the summer.

DeLong-Amaya said that most wildflowers that pop up in the spring begin to grow in the fall. Some fall and winter rain, combined with days of good sunshine, can lead to a full spring display of flowers. Those interested in spreading wildflower seeds on their properties should seed in the early fall for a spring bloom, she said. Other varieties also bloom in late summer and the fall, which could be seeded in the spring.

“It’s always nice to promote native flowers, because it helps promote habitat and food for native species, and they are still beautiful to look at,” DeLong-Amaya said.

Wildflowers benefit native pollinators, such as bees, butterflies, birds and beetles. They can also provide shelter for animals and insects and are a source of food for some native animals, she said.

Wildflowers can also grow in areas that have been disturbed—impacted by wildfire or prescribed burns, drought, over-grazing or excavation.

“Wildflowers will take advantage of disturbed sites,” DeLong-Amaya said. “If there is soil exposed, fast-growing plants like weeds and wildflowers will come in.”

The following wildflowers can be found across Central Texas each spring and into the summer. This list is not comprehensive.

Visual: small flowers with spread- out, yellow petals and an orange pollen disc at the center

Fun fact: an evergreen plant that blooms each spring

Fun fact: varieties can vary in color including shades of yellow

Fun fact: can stay in bloom through the summer if adequate rain is present

Fun fact: can be found across much of the United States

Fun fact: seeds are edible and can be used to make oils

Fun fact: produces dark-purple fruit that ripen in the summer 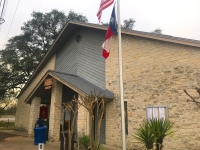