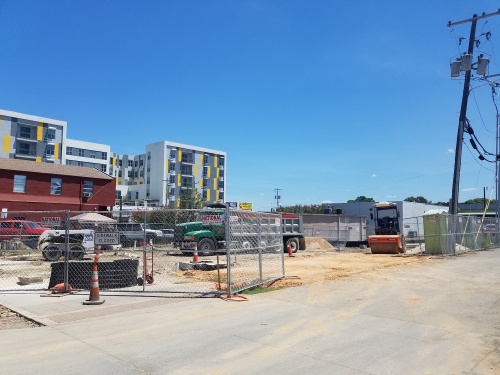 San Marcos’ first mobility hub is scheduled to open in late August or early September, but it could take the city several more months to finish placing all the planned features.

Mobility hubs have been used in other cities as convenient access points for different methods of public transportation. Austin, for example, has different types of mobility hubs that cater to bike, bus and rail riders.

Before San Marcos City Council approved plans for the mobility hub—located 214 E. Hutchison St.—in January 2018, the lot had been considered for a surface parking lot.

When plans for the mobility hub were approved by City Council, the project included a performance stage, a mural, benches, green space, an electric car-charging station, public art, a rain garden, a pet waste station, a water refill station, bike racks, a bike-repair station, a snack bar and four parking spaces, along with one Americans With Disabilities Act-compliant parking spot.

The hub will still include some parking, including a handicapped spot, but will have two fewer spaces than the five originally included in approved designs.

Bert Stratemann, San Marcos parks operations manager, has been helping manage the project due to his experience in public amenities. He said the city will be able to add the additional parking spaces in the future.

As for amenities, such as the bike-repair station and shade structures, Stratemann said the city is still on schedule with its late August target completion date. Details on the public art components have not yet been ironed out.

Additionally, bus transit stops that had been planned as part of the project will not be completed before the mobility hub is open. Stratemann said new bus stops, which would be placed on East Hutchison Street, could be operational as early as October.

Stratemann added that the project has stayed on its $361,000 budget approved by City Council.

Mayor Jane Hughson was still a council member when plans for the mobility hub were approved. She also served on the subcommittee charged with looking into potential uses of the property.

“Given the original plan of being a parking lot, which wouldn’t have held very many cars, this really is going to be a nice draw,” Hughson said.

She said the mobility hub, in time, could have car-sharing stations, along with other amenities to aid commuters.

Hughson said the hub will be more than just a place to help facilitate public transportation; it will also be a place to take a break and enjoy the scenery.

Though the city’s arts commission has not yet received many details about art options, San Marcos Arts Coordinator George Hatt said commissioners have expressed interest in the project.

“I think any time we have the opportunity to team up with other city departments as well as anybody else who we can work with to help bring some great art and cultural opportunity, it’s exciting,” Hatt said.