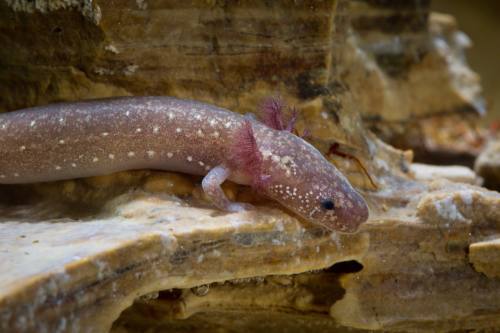 The Barton Springs salamander is one of eight species referenced in the notice of intent to sue.

The cities of Austin, Kyle and San Marcos have joined with the Barton Springs Edwards Aquifer Conservation District and the Wimberley Valley Watershed Association in filing a notice of intent to sue federal agencies over the anticipated impact of the Permian Highway Pipeline on several endangered species.

“Ours represents a broad, diverse coalition of landowners, cities and environmental [nongovernmental organizations],” said William Eubanks, the attorney who filed the notice of intent. “I’ve been doing this work for a long time, and it’s rare on any issue that you see this many types of entities coming together and collaborating on a singe project.”

It is the second notice of intent to sue both the U.S. Army Corps of Engineers and the U.S. Fish & Wildlife Service over permitting of Kinder Morgan’s $2 billion natural gas pipeline, which is set to run through the Texas Hill Country.

But while the first related primarily to the golden-cheeked warbler, the second, which is dated Oct. 16, also includes seven aquifer-based species.

Both actions attempt to push Kinder Morgan into a full and public environmental review under the National Environmental Policy Act, which will only happen under a more rigorous permitting process from the Corps and USFW.

Eubanks said that right now it appears the company is only pursuing a general nationwide permit.

“Normally a project proponent like Kinder Morgan would have to go seek a permit and obtain it, and it would take time, and the public would get to be involved,” Eubanks said. “Our understanding is that none of that is happening here.”

Members of the Texas Real Estate Advocacy and Defense Coalition are funding both notices of intent; the TREAD Coalition also funded a lawsuit over the use of eminent domain by private companies that is currently on appeal.

A statement by Kinder Morgan said the company was “not commenting in length” on the legal challenge but mentioned the company’s recent unrelated settlement with the city of Kyle.

“The City of Kyle’s potential participation in this litigation was specifically contemplated in the settlement agreement,” the statement reads.

Note: This story has been updated from the original.