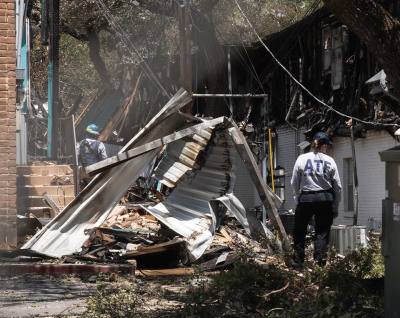 Agents from the Bureau of Alcohol, Tobacco, Firearms and Explosives investigate the San Marcos apartment complex fire on Saturday afternoon.

The Travis County Medical Examiner has determined that James Miranda, 23, is the fourth victim of the fire that took place last weekend. A fifth victim remains unidentified pending DNA analysis, the city of San Marcos said in a written statement.

The city of San Marcos has officially identified Haley Michelle Frizzell, 19, David Ortiz, 21, and Dru Estes, 20, as three of the five victims found at the Iconic Village Apartments after the fire that began early Friday.

They are among the five people confirmed missing last Saturday.

Multiple agencies and community organizations mobilized to help those displaced by the fire.