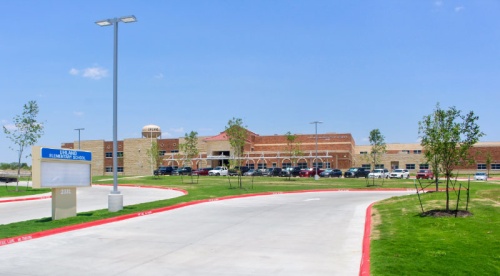 Elementary students in Hays CISD are starting the year in new attendance zones; 894 of those students are also starting in a new school.

“One of the hardest things a school district can do is change attendance zones,” HCISD Public Information Officer Tim Savoy said. “We ask our parents to be connected to the schools, and they do a great job of doing that.”

But a rising number of students in HCISD makes building new schools and changing attendance zones a necessity.

For the first time in its history, this year HCISD will enroll more than 20,000 students, Savoy said. According to demographic projections the district anticipates at least another 2,000 students by 2022.

“Growth is good, Savoy said. “But when people say growing pains, that’s one of the growing pains. In a fast-growth district where you’re adding more schools, one of the side effects is that you also have to change those attendance zone maps fairly
regularly.”

Uhland Elementary School, which opened for the 2018-19 school year in the southeast corner of the district, is a 115,000-square-foot campus that cost almost $34 million, including all furniture and equipment.

It was named for the Uhland School, which was a part of the community for much of the 20th century, according to HCISD. Like its namesake, the school’s mascot is a kangaroo.

The new Uhland was built with a bond approved by voters in May 2017; the district started construction in October 2017. The same bond is also funding HCISD’s third high school and a new campus for the existing Buda Elementary School. Both are on schedule to open for the 2019-20 school year.

Elementary schools in the district are all built from a standard prototype that HCISD has been using for about 10 years, Savoy said, but each time a new one is built, some improvements are made.

For example, in the past science labs have been built only in middle and high schools, but because of the emphasis on science in the State of Texas Assessments of Academic Readiness, or STAAR, test, HCISD is now building them in elementary schools, including Uhland and the new campus for Buda Elementary.

Both schools are designed with features that add to aesthetics but are also practical, Savoy said. Stained concrete floors are easier to clean and maintain than traditional tile floors; skylights in the cafeteria and the library reduce the need for fluorescent lights.

Uhland and the future Buda Elementary also feature collaborative learning areas, which, Savoy said, “are modeled after the working environment of any of your Silicon Valley companies.”

Both schools will also have an expanded capacity for 900 students.

Uhland was built in its current location in part because the school district already owned the land. The same parcel has room enough to eventually build HCISD’s fourth or fifth high school, Savoy said, and there is space for a transportation center and a technology data center.

“As part of previous bonds, we’ve purchased land over the years,” Savoy said. “If you can buy land before it gets really expensive then that’s much more efficient for the taxpayers.” For example, the new high school will be built on land that HCISD has owned since the 1990s.

When choosing a site for a new school, HCISD also considers where the district is anticipating growth.

In this case, much of the land around Uhland is currently undeveloped, while the elementary zone that borders the west side of the new Uhland attendance zone had more students than it could accommodate.

“The bulk of the Uhland Elementary population was actually coming from Hemphill,” Savoy said. “So it’s almost like we split Hemphill into two different schools, because they were severely crowded.”

Starting in August, HCISD will begin the process of redrawing the attendance zone map for high school students. The process begins when the school board impanels a zoning committee. The zoning committee starts with two preliminary maps and then asks for feedback from the community.

The new maps may be available as early as November but must be available by January so that families can start planning for the next school year, Savoy said.

As of the 2019-20 school year, HCISD will have 14 elementary schools, six middle schools and three high schools.

“The rezoning process attracts a lot of attention from parents, as it should,” Savoy said. “There’s a lot of opportunity for public input, and we want people to tell us what they think.”