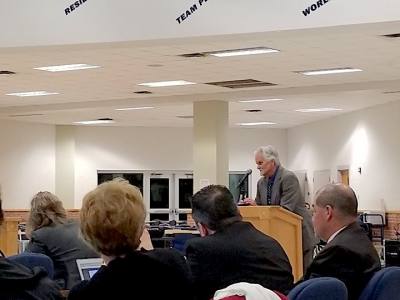 After 15 years of service, Carter Scherff, Hays CISD deputy superintendent and chief operations officer, has announced that he will retire at the end of January.

Scherff joined the HCISD team in February 2003 as the interim director of finance. Scherff rose quickly through the ranks to become interim assistant superintendent for business and operations within months of being hired. Before the end of his first year, the district hired him to serve the role permanently. In 2009, Scherff was named deputy superintendent. He added the title of COO in 2016.

Scherff said he appreciates the support he received through the years from the school board and superintendents he has worked for.

“This has been the best 15 years of my life. I love this district. This district has been centered on children and doing the right things for kids. It was that way when I got here and will be that way when I leave. It is a privilege to have worked here for that many years,” Scherff said in a news release.

During his tenure, Scherff managed the district's exponential growth—both in terms of staffing enough teachers and coordinating bond and construction efforts to make sure students had enough space. He oversaw the construction of 12 HCISD campuses, the purchase of new land for future school sites, the expansion of the bus fleet to transport more than 12,000 students, numerous technological improvements, repairs and renovations at all campuses, the expansion of some campuses and the construction of support facilities.

HCISD board of trustees President Merideth Keller said in a news release that Scherff would be missed by many "who are grateful for his commitment to and passion for our students and our community."

Superintendent Eric Wright said although he is new to district, Scherff's effect on the community is evident.

“Hays CISD has a healthy fund balance, a bond debt and repayment structure that is fiscally solid, facilities that are amazingly well maintained, land in the portfolio that can accommodate our near-future needs, and positive relationships with our city and county partners. We owe this, and much more, to Mr. Scherff,” Wright said.

Wright said HCISD has begun the search for a new COO and chief academic officer and expects to fill in the positions in the spring.
SHARE THIS STORY