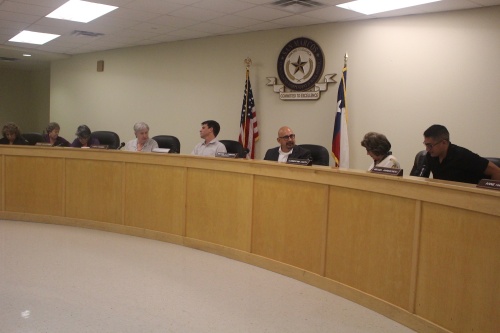 San Marcos CISD school board members at their Aug. 19 meeting.

On Aug. 19, San Marcos CISD board members adopted a lower tax rate for the 2019-20 school year—as mandated by the state’s new tax relief legislation—but the average taxpayer will still likely be paying more in school taxes.

The newly adopted tax rate, approved 6-0 by the SMCISD board of trustees at their Aug. 19 meeting, will be $1.3139 per $100 in property valuation. Trustee Anne Halsey was absent from the vote.

SMCISD school board president John McGlothlin told Community Impact Newspaper the board was committed to keeping its promise to voters in the 2017 bond election.

“We kept the tax rate consistent, which was our pledge to the voters when they passed the [2017] bond, so I’m pleased about that,” McGlothlin said.

Based on these estimates, the average home in San Marcos will produce about $2,707.88 in local school tax revenue—about $97.48 more per home than last year—through the newly adopted tax rate.

But with the district closer to having to pay into the state’s recapture system, McGlothlin said the rise in local appraisals could have a smaller impact on the district’s revenue stream.

“We no longer see the benefit to increase in appraisals as we once did,” McGlothlin said.

Funds for day-to-day operations, which include employee salaries, is collected through the “maintenance and operations,” or M&O, tax rate. The rate for paying off bond debt is called the “interest and sinking,” or I&S, rate.

School boards have the authority to change I&S rates without voter approval to manage their existing debt.

Most school districts in the state are not allowed to adopt an M&O tax rate above $1.17 per $100 in property valuation. I&S rates cannot exceed $0.50 per $100 valuation, according to state law.

Board members can raise the M&O tax rate up to the district’s rollback rate without voter approval.

Earlier this year, the 86th Texas Legislature passed House Bill 3, which, in addition to funding teacher raises across the state, called for school districts to adopt a lower rollback rate than previous years.

Under Texas House Bill 3, the highest M&O tax rate the SMCISD school board can adopt without voter approval is $0.99 per $100 property valuation—the rate approved by board members.

Since 2015, SMCISD has maintained an overall tax rate of $1.4141 per $100 in property valuation. But property values in San Marcos have increased each year since then, allowing the school district to generate more local tax revenue despite maintaining the same tax rate.

James Barton, the district’s interim-assistant superintendent of business and support services, said appraisals in the district have increased about 13% from 2018 to 2019.

The tax rate the district would need to adopt to generate the same amount of revenue it did in the previous school year from updated property valuations is known as the “effective tax rate.”

SMCISD’s effective tax rate this year is $1.2839 per $100 in property valuation.
SHARE THIS STORY