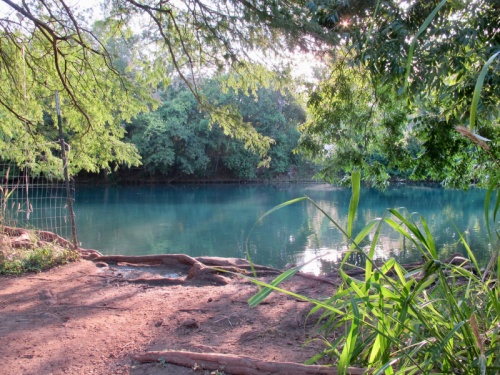 Researchers have identified a parasite that may threaten plants and animals living in the San Marcos Riveru2014a critical habitat for several endangered species.

And now researchers at Texas State University fear that an “increasingly severe” parasite problem in the San Marcos and Comal rivers could threaten the fish that live in them, including those that are already endangered—namely the fountain darter.

Haplorchis pumilio, the parasite, first arrived in the rivers by way of an invasive Asian snail, which is known to host more parasites than any snail in the world. David Huffman,  a parasitologist of Texas State’s biology department, said the parasite was brought to America with the aquarium trade in the mid-20th century; the snail made its way into the rivers as a result of people dumping their aquariums into the water.

Huffman, who has done extensive research on the Haplorchis  parasite and is a member of the Texas Invasive Species Institute, told Community Impact Newspaper that the larvae of the parasitic worm are known to penetrate the skin of fish and cause trauma and inflammation, which affects their ability to swim.

“This is not a trivial issue for a fish, of course,” he said. “They have to get their food that way and they have to escape from predators that way.”

Allison Scott, a graduate student who conducts research in Huffman’s lab, is building upon past research on the parasite to find out how it affects wild fish. To do this, she has conducted caged fish studies in which she cages healthy fish in areas of the river where the snail—and as a result, the parasite—is present.

“And we sample [the caged fish] along a time gradient,” Scott said. “So we’ll take them out at two days, some fish out five days. That’s allowing us to see sort of the progress of the infection. Then we can use that to sort of extrapolate, ‘OK, what about a fish that lives in this area for a year?’ So we can kind of see how [the parasite] builds up [in the fish]. And from the previous experiment that my predecessor did, we know these lethality levels. So we know approximately how many parasites these fish can get infected with before they start just dying of acute trauma.”

Through these studies, Scott has found that the Haplorchis parasite is having a demonstrably negative affect on fish in the river, including the endangered fountain darter. In the caged fish studies so far, Scott said the fountain darters seem to be able to reproduce at a rate that allows the population to make up for the fish killed by the parasite. However, she is not sure how long that will continue as the parasites gradually build up in the fish.

“[The fountain darters] have been able to reproduce sort of in a compensatory way; they do seem to be replacing themselves, that we know of,” she said. “The problem is we don’t know how healthy these fish are and how long that’s going to be able to continue if every fish that’s [in an area of the river where the snail is present] is maybe not even living until the age where it can reproduce. Because at the rates of parasitism that we’re seeing, there’s no way that fish could survive one year in those waters. And that’s how long it takes fountain darters to mature.”

Scott said she is just scratching the surface on finding out how the parasite can affect fountain darters in the long term, but it is an urgent issue that needs to be paid attention to not only for the sake of the endangered species, but for all of the fish in the river.

Huffman said he wants to raise public awareness about the effects of this parasite because it has gotten increasingly worse over the years, and may be exacerbated during the next drought.

“As soon as the drought comes, the flow slows down; the numbers [of fish] that carry [the parasite] build up; and they reach the lethal level even faster because the infective stages are more abundant and more dense in the water,” Huffman said. “There’s some kind of limit. I haven’t seen it, we don’t know where the limit is on how much the [fountain darter] population can stand this parasite taking individuals out before they’re able to reproduce.”

Huffman said that Centrocestus, one of the other parasites carried by the snail, has been actively monitored by Edwards Aquifer Habitat Conservation Plan for years because of the effects it has on aquatic life. He believes that the Haplorchis parasite is now doing more harm than Centrocestus and is unsure why the agency has not yet focused its efforts on monitoring it as well.

“I think the prudent thing to do is to establish a monitoring program to keep track of this and develop some experiments with snail removal or something so that when a drought comes, we’ll be ready for it, instead of walking out there one day and seeing that almost all the fish are dead,” he said.

Although Haplorchis is impacting the fountain darter, the species is doing “quite well,” Huffman clarified.

“But we know that [Haplorchis] is having a negative impact on it right now, and that impact is going to increase during the next drought,” he said. “And I think we should at least be monitoring it to see how the trend is going.”

In a statement to Community Impact Newspaper, a representative from the EAHCP said although the agency does not monitor the presence of Haplorchis, it has conducted biannual population surveys of the fountain darter in the Comal and San Marcos rivers for the past 20 years.

The EAHCP stated Haplorchis was discovered in the rivers in 2013, and further analysis shows it has existed there for decades.

“Currently, we are working with our partners to identify the threat Haplorchis may pose to the fountain darter and whether to include it in our existing monitoring programs,” the statement said. “The EAHCP is regularly monitoring the data generated by existing programs to understand the health of the species.  Currently, we don’t see any results suggesting the parasite is having a negative effect on the population of the fountain darter. We will work with our partners at Texas State and the springs communities to identify the threat the parasite poses and how to move forward.”

The invasive snail carries three different parasites, including Haplorchis, which also affect fish and other aquatic life, such as ducks, Huffman said. However mitigating the effects of an invasive species is tricky, he said.

“Solving the problem once the snail gets in to an ecosystem—it’s virtually impossible to get it back out without just completely starting over from scratch,” Huffman said. “And that’s of course out of the question.”

Huffman said that some researchers have tried to bait the snails into traps and remove them, but the experiments have so far been inconclusive.

“I think more research could be done, especially on developing maybe some kind of effort around snail removal and getting people silly goofball prizes for getting the most buckets of snails out of there on one weekend or something.”

If the community were to get involved with the large task of removing snails from the river, it could potentially have a significant positive impact on the health of the river’s aquatic life.

“I think after three or four years of doing that I think we would see a big impact in the reduction of snails; and that’s going to reduce the parasite pressure on the fish,” Huffman said. “So fewer fish are going to be getting lethal levels of infection.”

Scott said since the river and its ecological diversity is important to the community’s character, she believes residents might feel compelled to help mitigate the problem, once awareness is raised.

“If we could sort of get those people to pay attention, and kind of back this, as opposed to just sort of the two of us, a couple of crazy snail biologists, saying, ‘Hey everybody go pick snails out of the river.’ [If we] get some other people, sort of community entities involved with that, and kind of make our case to them and say, ‘Hey this is a problem on multiple levels; we really need to address this,’ then it can sort of move up from there,” she said. “I think that’s sort of the key to doing it, getting something like that rolling.”
SHARE THIS STORY