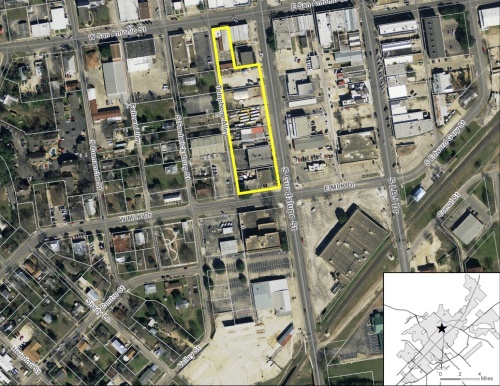 San Marcos City Council voted 4-3 on June 18 to postpone its consideration of a conditional use permit that would green light an approximately 545-bedroom, 171-unit student housing development along an entire block of South Guadalupe Street.

Along with the council’s decision to postpone the vote until August or September—the body does not meet in July—the members voted unanimously to create a subcommittee to negotiate the proposed project with the developers, who represent 75 Sylvan Street LLC, before the council considers the permit this summer.

Council members Joca Marquez, Mark Rockeymoore and Saul Gonzales voted against postponing the vote on the permit. Ultimately, though, Marquez volunteered to serve on the council committee along with council members Melissa Derrick and Ed Mihalkanin.

Marquez delivered an impassioned speech expressing disapproval of the proposed development, mentioning that she does not believe rent-by-the-bedroom student complexes align with the city’s need for affordable housing.

According to a housing needs assessment released by the city in March, as of 2017, 72% of residents involved in the San Marcos housing market are renters, and more than 65% of them are cost-burdened. In other words, 9,700 renters in San Marcos have to use more than 30% of their income to cover housing costs. Of those renters, nearly 6,000 are considered severely cost-burdened, meaning they have to use half or more of their income for housing expenses.

Marquez, who worked previously with Texas State University as a research analyst studying statistics on freshman class students, said that developers are misrepresenting the demand for student housing by only citing enrollment numbers. She pointed out that university data shows that retention and persistence, meaning the number of students who stay at Texas State from semester to semester, are down.

The housing needs assessment also showed that rent-by-the-bedroom student housing, the production of which has spiked in recent years, has higher rents, with an average monthly cost of $1,827 per unit while non-student apartments have an average rent of $1,043.

“A lot of [students], actually 52% of them, are first generation students—meaning that they are the first in their family to attend college—which means that their parents cannot help them pay for an apartment, especially rent-by-the-room. This very predatory rent-by-the-bed is hurting a lot of kids and hurting a lot of people in this town.”

Council Member Saul Gonzales echoed the same sentiment and implored the developers to consider changing their proposal to include affordable housing.

Approval of the conditional use permit will require an affirmative supermajority vote by the council because the San Marcos Planning and Zoning Commission at its May 29 meeting voted to recommend denial of the request with a 7-1 vote. Commissioner Gabrielle Moore was the only one to vote against the recommendation. Commissioner Matthew Haverland was absent.

The proposed development, if approved, would be built on the south side of the square between West San Antonio Street and MLK Drive where some retail, restaurant, office and commercial spaces currently exist.

The city already allows multifamily housing on the block, which is defined as no more than three bedrooms per unit. As proposed, the developers have designed the student housing complex to consist of four- and five-bedroom units, with a rent-by-the-bedroom model.

Several speakers during the public hearing both for and against the project described the block, in its current state, as “dilapidated” and in need of revitalization. However, opinions on whether or not this student housing development would be the right project to do that were deeply divided.

According to city staff, if the project is approved, it will trigger required streetscape improvements within the right-of-way on South Guadalupe Street, including large sidewalks, street trees and the installation of street parking.

The city requires “purpose built student housing” developments to provide 1.05 parking spaces per bedroom, with an option to reduce parking by up to 50% and pay a fee instead. The planned development only allots .75 parking spaces per bedroom; the developers agreed to pay a fee of approximately $845,000 in lieu of meeting the full parking requirement.

The fee would go into the city’s new fund for a parking management district, which is dedicated to go toward parking, transit, pedestrian and bicycle infrastructure improvements downtown.

The conditions would require a range of commitments from the developer including the implementation of streetscape improvements to extend the intersection of West San Antonio Street and South Guadalupe Street as well as an agreement to work with the city to mitigate light and noise nuisances that may come from the complex’s parking garage.

Some of the most notable conditions concerned fire safety. Since rent-by-the-bedroom apartments typically have a lock on each bedroom door, representatives of the San Marcos Fire Dept. noted that a project of this size that uses the rent-by-the-bedroom model raises concerns.

According to the department, this is partly because more locked doors within each unit would add to the number of doors that would need to be opened with force during an emergency.

However, the developer worked with the fire department to find solutions to mitigate some of the fire safety concerns. Because of this, the conditions for approval of the conditional use permit require the developer to add a functional entrance every 100 feet, on average, along the street frontage. The conditions also include additional smoke compartment and barrier requirements that must, at the expense of the developer, be reviewed by a third party for compliance of the city’s fire codes.

Resident Roland Saucedo said he is not comfortable with the level of concern associated with the development, citing the fire that left five people dead at Iconic Village Apartments last summer. Saucedo said while he recognizes the need for downtown revitalization at the site of the proposed project, he does not believe a complex of this size made up solely of rent-by-the-bedroom units is the right fit.

Several residents echoed Saucedo’s sentiments, noting that they fear downtown will be overrun with large student apartment complexes and detract from the historic character of the area.

Local business owners, people who live near the proposed development and other San Marcos residents came out to show their support for the project for its potential to improve the south side of the square and boost the downtown economy.

A resident and former law enforcement officer said during the public hearing that he likes its location because it may reduce the number of students who drink and drive, as residents of the complex would be in walking distance of downtown bars.

Council members Lisa Prewitt and Melissa Derrick said they believe the site of the potential development needs to be revitalized, but that they will not vote for the proposal in its current state.

“Some people talked about the economy downtown and diversifying the economy—you’re not going to get a diversified economy if you only have one age group of people living in our downtown,” Prewitt said.

She added that San Marcos is struggling to retain Texas State graduates because of the lack of housing that meets their needs.

“If you didn’t buy a house years ago and you’re a graduate, you’re not going to get a house,” Prewitt said. “You’re going to be stuck living in an all-student housing complex that even the students don’t like. They’re incredibly expensive.”

“I definitely would like to talk to the developers to see what we can do to accommodate this development but also have a deeper discussion about the health and wellbeing of San Marcos, our community, our residents now, the ones that are graduating—the ones that we’re trying to retain—and how you guys can be a player in helping us do that in San Marcos,” Prewitt said.