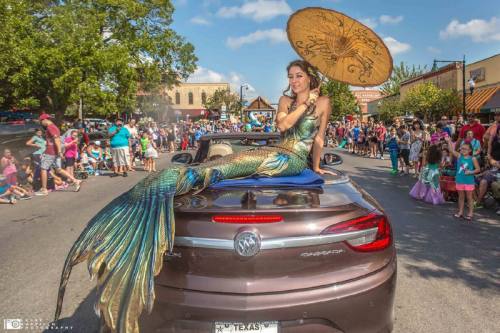 Mermaid Society SMTX hosted its annual Splash festival for the first time in 2016.

Mermaid Society SMTX, a nonprofit centered on celebrating local art and promoting river guardianship, has served as the catalyst for the city’s pursuit to become the mermaid capital of Texas.

San Marcos City Council announced at its April 23 meeting it intends to request passage of a legislative resolution to make the designation official. The city’s connection to mermaids harks back to the 1950s when the city had an Aquarena Springs theme park where the half-fish, half-human characters were a main attraction.

“The mermaid symbol is our connection to our past with Aquarena Springs and the Aquamaids,” Mermaid Society SMTX founder July Moreno said, referring to the characters that performed at the theme park. “And the new transformation of what was once seen as entertainment with the Aquamaids is now seen as a revival of the mermaid for environmental protection of our San Marcos River.”

In 2016, Mermaid Society SMTX established the city’s annual SMTX Mermaid Splash, a multi-event, 15-day festival. Moreno said the festival is designed to be a celebration of San Marcos’ creative community and river-centric culture.

“I’m a native San Marcan and very proud to have been born and raised in San Marcos,” she said. “And I just felt like there was an opportunity to see something creative for our community that would bridge the past to the present for the future.”

“I think the more that we can help the community support this idea [of becoming the state mermaid capital], the better off we will all be,” Moreno said, noting the designation’s potential to boost the local economy and positively affect preservation of the San Marcos River.

Moreno said one of the most exciting things the organization has done this year was establishing a partnership with San Marcos CISD to bring “Mermaid Maya” into elementary schools to teach students how to be good stewards of the river.

“So much of our community is concerned about the health of our river—activists ... are actively cleaning it and doing all the things to protect it so that future generations have this beautiful, pristine 72-degree river year-round,” she said.