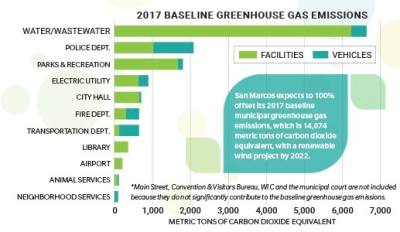 With its newly established sustainability committee, San Marcos City Council is looking to become a leading environmentally friendly municipality—a goal toward which the city is already making swift progress.

By 2022, the city of San Marcos as a municipality is set to 100% offset its 2017 baseline greenhouse gas emissions with the implementation of renewable wind energy in city facilities along with the use of other green practices.

The city entered into a wind power agreement with AEP Energy Partners in March 2018, according to Assistant Electric Utility Director Tyler Hjorth. San Marcos is set to begin using the energy, which is sourced from a wind farm located in West Texas between Abilene and Sweetwater, next year.

The council’s new committee is charged with advancing the city’s progress on its sustainability plan, which was created in 2013. According to city staff, 73% of the actionable items in the plan, which details ways the city can improve its sustainability, are in progress, ongoing or complete.

Some of the completed measures from the plan include the retrofitting of street lights with energy-efficient light bulbs and expanding the police’s bike patrol. However, the city has not yet made progress on some of the plan’s other items, such as creating and adopting an energy master plan and passing a green fleet policy that would require the purchase of hybrid or alternative-fuel vehicles.

Council Member Lisa Prewitt, who was also appointed to the sustainability committee along with Marquez and Council Member Mark Rockeymoore, said at the April 2 council meeting that she believes both the community and the past and present City Councils have done a good job of being environmentally conscious.

Since the wind project is already expected to fully offset the city’s emissions by 2022, that would mean any additional renewable energy contracts—including the proposed solar power agreement—could potentially give the city extra renewable energy to use as the city grows, and it can also be sold to the electric grid.

Jan Klein, the city’s conservation coordinator, said if the city is able to secure a solar power purchase agreement, staff estimates it would have the potential to provide the city with an additional 169.5% savings on its greenhouse gas emission baseline.

“In general, we are very interested in pursuing short- and long-term contracts that can add to our renewable energy portfolio while we also maintain our reliability, safety and fiscal responsibilities,” Hjorth stated.

Marquez said she believes residents of San Marcos are ready now more than ever for strengthened environmental practices.