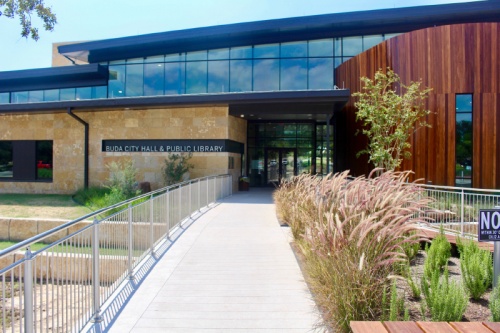 In anticipation of significant population growth over the next decades, several years ago Buda officials began to look seriously at how to ensure a reliable water supply.

One of the ideas to come out of those discussions was aquifer storage and recovery, or ASR, then a relatively unknown method of storing water for future use. During ASR, water from one source is injected into existing formations in an underground aquifer, then pulled out during times of drought or peak demand.

In 2016, Buda authorized a feasibility study and, when the research returned promising results, developed a pilot study that will begin this year.

For Buda, which has worked—and occasionally struggled—to secure more water, ASR may offer a chance to stretch the water sources it already has and be an opportunity to obtain additional water, all while diversifying its supply.

“It gives us some capability to have more drought tolerance,” Ture said. “We’re looking for creative ways to have reliability.”

How extensive Buda’s ASR project can be remains unknown. In addition to needing more information from the pilot study, in order to truly fulfill its vision for ASR, Buda will need the cooperation of the 86th Texas Legislature.

For Buda, ASR is a way to make sure the city is prepared for the worst.

“That idea is that if we enter a time of drought, [Buda has] a way to—still do their water conservation measures and whatnot—but basically not have to rely on the Barton Springs Edwards Aquifer water during that time when that aquifer is extra strapped,” said state Rep. Erin Zwiener, D-Driftwood, who has a background in conservation and has filed a bill to help Buda pursue a broader ASR program.

Not relying too much on the aquifer is important for Buda. Though the amount varies, Buda gets between 40 and 60 percent of its annual water supply from the Edwards Aquifer through permits from the Barton Springs Edwards Aquifer Conservation District. But in dry conditions, the BSEACD starts to limit that supply—in a severe drought, by as much as 50 percent.

In addition to offering Buda the chance to store water it does not need immediately, ASR can give the city a chance to secure more supply through additional permits—called Class D— that the BSEACD is making available specifically for use in ASR systems under non-drought conditions.

“One of the big things that all city and water supplies are looking into is having more diverse  sources of water,” Zwiener said. “That’s a component in resiliency.”

There are two mature ASR projects in the region—San Antonio and Kerrville—and there are another two in progress even closer to home. The Ruby Ranch subdivision in Buda has begun to inject water into its wells, and New Braunfels Utilities is not far behind.

Like Buda, New Braunfels faces ongoing population growth and a water supply partially composed of permits from the BSEACD that could be curtailed in dry conditions. NBU started to explore ASR as a way to diversify supply  and increase resilience.

“Some people forget that 2011 was the driest single year on record,” NBU Chief Executive Officer Ian Taylor said. “If we’re going to continue to sustain this growth along I-35, these are the kind of forward-looking things that folks need to be involved in.”

ASR is simpler than it may sound.

“Aquifer storage and recovery is essentially just a way to store water underground, rather than above ground,” said Kevin Kluge, director of innovative water technologies at the Texas Water Development Board.

Surface reservoirs are the traditional way to store water, but they are disruptive ecologically, hard to  find locations for  and, especially  in a place like Texas, prone to evaporation.

Working with existing formations in underground aquifers, ASR can avoid some of these issues. But that also means ASR is limited to places that already have the right conditions—a formation with enough room for extra water, but enough stability to keep the water from flowing away.

According to the feasibility study, such a formation does exist beneath Buda—but not in the Edwards Aquifer, which is directly below the city. Instead, Buda is looking to store water in the Cow Creek formation of the Trinity Aquifer, which is even farther underground.

“They’ll learn a lot about the aquifer,” Neffendorf said. “If everything comes back like we think it should, just based off the data that we have in the surrounding area, then we can complete the surface facilities and potentially in the future add more wells.”

If the pilot succeeds, Buda anticipates having surplus water from the Edwards to inject into the Trinity about six months out of the year—late fall, winter and early spring, when demand for water is relatively low.

The water will then stay in the Trinity Aquifer until it is needed, which would likely be for one of two reasons, Neffendorf said: pumping cutbacks during dry conditions or peak demand.

“We could pull from our ASR reserves to help us get by,” he said.

A second chance at the bill

That works for Buda’s initial plans,  which are limited to Edwards water, but eventually the city would like to be able store water from any source in its ASR system, including treated surface water and water from other aquifers.

“This [rule] goes back quite a ways,” said Brian Smith, principal hydrologist at the BSEACD. “It was meant to be extra protective of the Edwards, but [there were] unintended consequences.”

In 2017,  Zwiener’s predecessor, then-Rep. Jason Isaac filed a bill to change those rules, but the House never voted on it,  despite a lack of vocal opponents.

So Zwiener is trying again. She filed a bill in the Texas House Jan. 23 that would amend the law to allow an exemption for Buda’s program, and state Sen. Donna Campbell, R-New Braunfels, filed one with the senate. New Braunfels has a similar bill, and Smith said the BSEACD supports both.

“It’s good to remove some of these limitations that were never intended to stop things that are good for water supply,” he said.

Zwiener is optimistic about the chances of passing the new bill.

“If this bill has opposition I haven’t found it,” Zwiener said. “It’s just a question of: can it get enough momentum?”


The future of ASR

There are about 20 recommended ASR projects in the state water plan, but Smith said he has not recently heard of any new ones in Central Texas.

“We’ve been trying to get the word out for quite some time now,” he said. “We do hope that others are paying attention.”

In Buda, Ture said ASR may be able to offer the city more security.

“I think Buda’s gotten in to a very good place,” he said. “We [can] be a community and a place where we can tell businesses and homeowners that move here, ‘We will make sure that we have water for you.’”