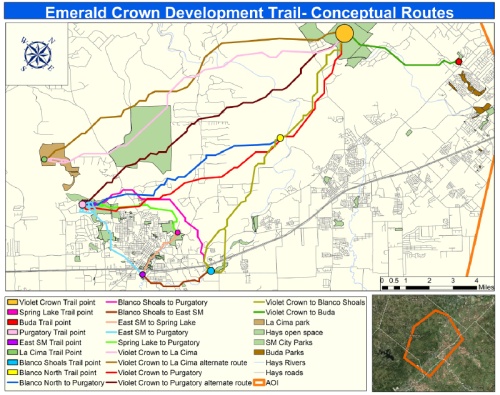 The public is invited to attend one of three workshops over the course of three days at the end of March to learn about the proposed trail that would connect San Marcos, Buda and Kyle to South Austin's Violet Crown Trail.

In the fall, Texas State University geography department students mapped 12 conceptual trails that could eventually become the so-called Emerald Crown Trail, and now, the public is invited to weigh in on which trail option it prefers.

“This trail will be to get people from one place to another,” San Marcos Greenbelt Alliance Executive Director Mark Taylor told Hays County commissioners in early January, adding transportation was its primary goal. “I think we will ultimately find—if we’re able to put this project together—that our communities [will be]connected more closely. That includes not just the three cities but the rural areas.”

The trail will likely accommodate two-way traffic and have varying surface levels depending on the topography, Taylor said.

The workshops will begin with a presentation regarding the proposed trail, followed by an opportunity for the public to provide comments to the work group, which consists of San Marcos Greenbelt Alliance; Hays County; the cities of Buda, Kyle and San Marcos; the Meadows Center for Water and the Environment at
Texas State University; the Guadalupe-Blanco River Trust; the Hill Country Conservancy; the Texas State University Geography Department; and Take-a- Hike San Marcos.

The workshops will be facilitated by the National Park Service Rivers, Trails and Conservation Assistance Program.

The events will be held the following days at 7 p.m.: