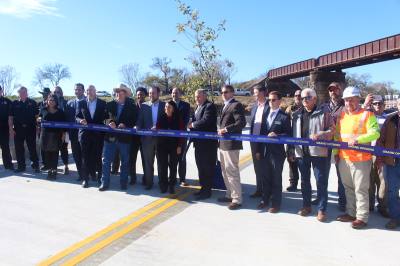 Residents Shauna and Bill Herzog said they have spent the last two years backtracking an extra 20 minutes through San Marcos to get to I-35 North, until today.

The Texas Department of Transportation and Hays County opened the new Post Road bridge half a mile from the Herzog's ranch today, giving drivers like the Herzogs another route north.

The bridge was washed away during the 2015 Memorial Day flood, and while the Herzogs' home was unaffected, their commute was altered drastically.

"It will be nice not to go through San Marcos," Bill Herzog said.

"It's taken a lot of hard work to restore this bridge back to where it is today," McCoy said.