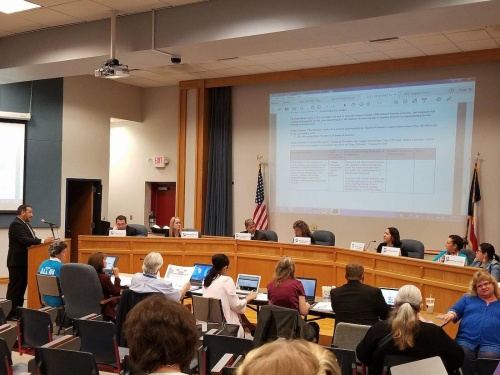 In a specially called meeting Thursday, the Hays CISD board of trustees voted unanimously—with one trustee absent—to hire Eric Wright as the district's new superintendent.

HCISD Board President Merideth Keller said Wright demonstrates the leadership skills and excitement to take on the challenges HCISD faces.

“Dr. Wright is the right person to lead our schools as we continue to grow in student population, expand the educational opportunities for our students and maintain our strong sense of community and family," Keller said in a news release. "He will be able to help us thrive as we grow while keeping us grounded in the core values that have made our school district a special place to live.”

Wright said preparation, tradition, pride and hard work are the key ingredients in the formula for success.

“Achievements are evident when you set a positive learning climate that is based on excellence, fairness, equity, justice and trust. Managing a school district is not a solitary pursuit. People want to have a voice regarding their schools, including parents, students, employees and community members," he said in a news release. "As an educational leader, my job is to communicate and challenge individuals. Working together, we are successful when our future graduates are well prepared to be happy, productive and competitive in the global economy.”

During his tenure at Huntington ISD, he led the district to Texas Education Agency-recognized status five years in a row despite the district being one of the 50 lowest-funded school districts in the state.

At FISD where Wright currently serves as superintendent, the district has met standards and consistently performed at or above the state average on STAAR, ACT and SAT testing measures.

Wright was one of 34 applicants. In early November, the board narrowed the field of candidates and interviewed six of them. Two candidates were invited to a second round of interviews last week. On Tuesday, three HCISD board members conducted a site visit in FISD to observe Wright’s leadership in person according to the news release.

Even though Wright has been named lone finalist, the board is required by law to wait 21 days before it can offer him a formal contract. That is expected to occur at a special board meeting in December.
SHARE THIS STORY