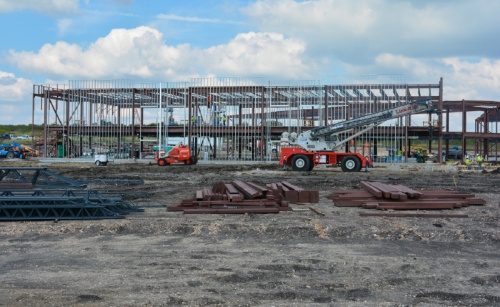 With Hays CISD’s 14th elementary school opening next school year, some students and families may have to call a new school home after the school attendance boundaries are rezoned.

Each time the school district adds a school, it seeks input on attendance boundary redistricting from parents, the community and an attendance zone committee.

The new school is part of a bond project approved by voters earlier this year. The 115,000-square-foot campus located between High Road and Camino Real Elementary School in Kyle is projected to open in August.

Christine Molis, HCISD chairwoman of the 2017 Elementary Rezoning Committee, said the committee’s goal is to keep school attendance areas as stable as possible.

“The biggest thing we want to do is not make drastic changes because we don’t want to uproot children established in neighborhoods that are in a certain zone,” she said. “We want everyone to stay close to one another, but of course some are going to have to move.”

HCISD Public Information Officer Tim Savoy said the board knows how much of a challenge rezoning can be, which is why it wants the community to send ideas and suggestions.

“One thing that you don’t see when you read the process—but we know and understand—is that this is difficult for families. We ask parents to get connected, [get] involved in their schools and then to come along and tell [the parents], ‘Hey, you know what? We may have to have you go to another school.’ That’s a tough thing to do,” Savoy said.

HCISD held two public forums Oct. 24 and Nov. 7 on the proposed rezoning maps. Savoy said rarely does the first draft of the map get used because the zoning committee and board try their best to listen to what the community wants.

So far, the committee had seen five iterations of the map.

On Nov. 17 and 27 the zoning committee will take input from the community and adjust the maps as they see fit.

The board of trustees will vote on the final map Dec. 11.

Savoy said although it is one of the toughest discussions a school district has to make, he said stable changes are worth it for future benefits.

“Having to decide where the line is going to be drawn because we know that those lines affect real people is hard, and that is why we don’t want to do it without hearing from those that will be affected,” Savoy said. “There are tremendous benefits to growth. As we grow as a district and in size, we are able to offer more unique and specialty classes that we wouldn’t be able to do if we were smaller, and as we grow and need to add new facilities, the students who get to go to those new facilities get to experience the brand-new building with new equipment.”

Next fall, HCISD will rezone its attendance boundaries again for the new high school set to open in August 2019.

Slated to be built off RR 967, HCISD said the $122 million project will have a capacity to serve 2,250 students in ninth through 12th grade and offer rigorous general curriculum, outstanding fine arts programs, innovative career and technology education courses, and competitive athletic experiences.
SHARE THIS STORY