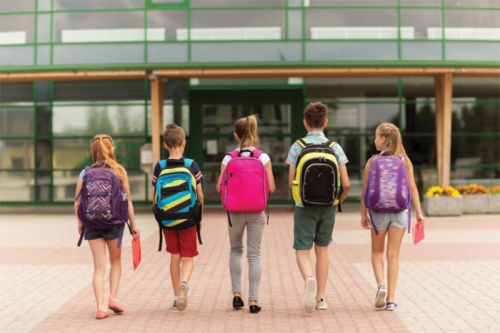 As many as 1,470 Hays CISD students who previously rode buses will have to find a new way to get to school starting Jan. 1.

With the addition of new sidewalks, some neighborhoods are no longer considered part of hazardous routes. On Aug. 31 the HCISD board of trustees voted to discontinue 17 bus routes to five schools in those neighborhoods.

HCISD Public Information Officer Tim Savoy said although the change is not an easy adjustment to make, it is necessary because of budget cuts.

“It’s just a reality that we live in. If you do transportation for some students not on a hazardous route that live within that 2 miles, you would have to offer that to everyone,” he said. “Could we do it through local funding that’s not reimbursed by the state? In theory, yes, but all of that money—and it’s expensive—would have to come from somewhere else or we would have to give something up collectively as a district.”

Safety first
Vanessa Petrea, an HCISD trustee and a mother whose Elm Grove subdivision home was originally along a hazardous route and then was considered no longer hazardous in 2014, said she does not feel comfortable letting her fifth-grade daughter walk unsupervised 2 miles through two neighborhoods and across nearly nine intersections with only one crossing guard along the route.

“The traffic is really, really bad, so I drive her very, very early. She likes to be one of the first students at school, so it’s worked out for us but it’s not ideal,” Petrea said. “When I moved into this neighborhood, I did not know that the bus service would one day no longer be offered, and if I had known that I probably would not have moved here. As a working parent, it has been a logistical headache to figure it all out.”

She said the board’s hands are tied because of the state’s definition of hazardous routes, but the board is brainstorming solutions to keep children safe.

“As the city of Kyle and Buda work to build connectivity in their neighborhoods and build more sidewalks—or, like in the case of [the] Garlic Creek [neighborhood], they put in a pedestrian bridge to connect two neighborhoods to each other—it will slowly create issues for our bus services,” Petrea said. “It’s really a sad day when you have to say, ‘We don’t want sidewalks.’ Everyone likes the idea of a [walkable] neighborhood, but [when] bus services and reliable transportation is taken away and traffic increases, it’s a difficult dilemma.”

HCISD trustee Esperanza Orosoco said the board is working with Buda and Kyle officials to create safeguards such as lower speed limits in the impacted areas.

“The sidewalks don’t always catch up to those subdivisions for a number of years, and so until such improvements in the pedestrian infrastructure are made, we supplement with bus services for kids who live fewer than 2 miles from their school,” he said. “But if you moved in and had bus service from day one, you are probably not looking at that as being the temporary fix until such time until the sidewalks can be put in. You are looking at it [as], ‘This is a service I had that I’m now losing.’”

Jamie Fulenwider, who has walked her children to and from her home in Plum Creek to Negley Elementary School for nine years, said she has seen firsthand how impatient and distracted drivers can be. Now with her children attending Barton Middle School and Hays High School, she said she will have to begin her and her children’s morning routines 30 minutes earlier to get to school and work on time.

HCISD Chief Operations Officer Carter Scherff said he wanted to ensure all the city sidewalk projects were completed before making the changes to bus routes.

“We knew this was happening, but you could never tell how long it’s going to take for a project to be completed,” he said. “In order to give the parents the time make up their mind to figure what they wanted to do for their family, we decided to wait until January.”

Oroscoo said while the situation is challenging, using family, faith-based and neighborhood networks could be a resource for transportation alternatives.

Fulenwider has been communicating with HCISD trustees and said she hopes a safe solution will be found before January.

“There are ways to solve this problem, thinking outside the box, that will keep these kids safe, will keep the parents from worrying, will keep the school board from being liable,” she said.
SHARE THIS STORY