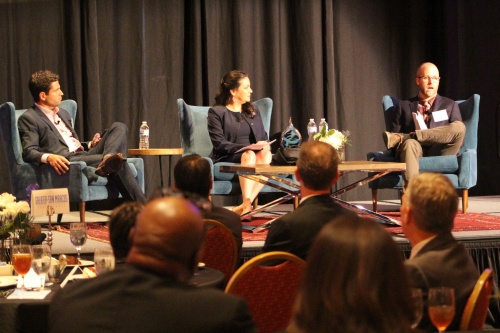 Entrepreneurs shared their thoughts on how to enhance existing industries at the 2019 Greater San Marcos Innovation Summit on Sept. 18.

Speakers were invited as part of this year’s summit at the Embassy Suites San Marcos Hotel & Conference Center. The event, which was first organized six years ago, was hosted by the Greater San Marcos Partnership. This year’s keynote speaker was Mike Georgoff, chief product officer of H-E-B Digital, who described his experiences as part of the leadership team at Redbox.

Kinzer and his company were also recognized with this year’s Dick Burdick Award for Innovation, presented by the Greater San Marcos Partnership.

“What we’re trying to do is show that innovation is taking place outside of the well-known tech hub of Austin and along the innovation corridor at places like Texas State University, San Marcos and all the way to San Antonio as well,” Cruz said.

Cruz told Community Impact Newspaper that Texas State University and Austin Community College as well as the local school districts provide a “workforce pipeline” for companies, attracting more entrepreneurs to the area. She added that a major focus of the Sept. 18 summit was “industry enhancement.”

“We wanted to focus on industry enhancement, taking an existing industry and moving it into the 21st century,” Cruz said.

More than 250 registered for the event, which was attended by business professionals as well as elected officials.

San Marcos Council Member Joca Marquez said the summit is a way for city leaders to create networks and relationships that can benefit future economic development.

“I really think that it’s important to showcase companies and what they’re doing,” Marquez said.
SHARE THIS STORY