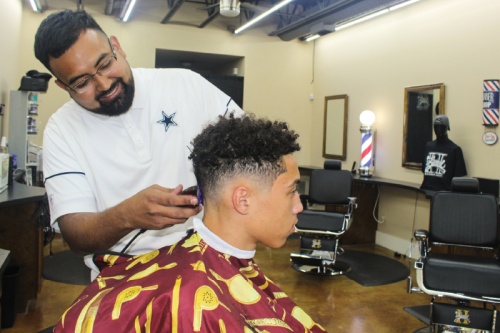 Despite the stereotype that once many high school graduates leave the nest they do not come home, Julie Snyder, CEO of the Kyle Area Chamber of Commerce, said the best place for people to start a business is their hometown.

“For a student that starts a business [at] home, it will likely perform better, survive longer. There will be greater profits in [the business] because they have the network,” Snyder said. “They grew up here. They have their friends and family. They know the community and what the community needs when it comes to the type of business and services the community wants.”

Christopher Maldonado, owner of Two Blessed Barbershop and a graduate of Hays High School, said he always knew he would move back to Buda after living in Abilene, Texas, for eight years, especially after his daughter was born.

After opening his business Aug. 1, Maldonado said now is the best time to not only live in Buda but also start a business there with Austin, Buda and Kyle growing so rapidly.

“With Austin growing so much, it’s better that I moved back [to Buda] now because the growth in Buda is about to blow up, and it’s cool to be a part of that,” he said.

Snyder said the main reason people leave their hometown after high school or college is because they feel it does not offer them the opportunities they want, whether that be a salary, an industry or the job itself. However, these reasons are also why students may come back to their hometown.

“Kyle is a young city, so that opens up a lot possibilities. There isn’t a lot of competition here yet, so we are prime for startups,” she said.

Snyder said locals coming back and starting businesses is one of the best ways to help the community and address concerns about what is lacking in a city.

“What better way than to have our students—that we are paying for with our tax dollars—stay in our community and start a business?” she said. “So then our community is benefiting from the education that we’re providing as taxpayers, and then we get the property tax from the business, the sales tax and the services.”

According to Kyle Director of Economic Development Diane Blank-Torres, small businesses are the backbone of the community, especially when the owner is from that area.

“It’s like they have that much more skin in the game. They don’t want to fail here. This is where they grew up,” Blank-Torres said. “Corporate businesses are more clear on what they are adding to a city; the jobs and the economic impact is up front. The small, homegrown mom and pops are more blood, sweat and tears. It may not be as obvious in dollars, but what they are giving back is probably just as important, or more important, than what the big businesses are giving back.”

“If company X is owned by a person who grew up [in Buda], when it’s time for them to grow from 5,000 square feet to 20,000 square feet, they’re more likely to look in Buda because that’s where they are from,” Miller said. “Whereas another company may say, ‘We have to grow anyway, let’s look at New Braunfels or San Antonio or somewhere else, and then [Buda] has to compete with other cities [to] convince the company owner to [not only] keep those existing jobs here [but] also the new jobs that are going to be created here [from the business].”

A 2016 study performed by the University of Texas at San Antonio Institute for Economic Development’s Center for Community and Business Research showed small Texas businesses that had less than 100 employees generated $13.8 billion in state tax revenue and $14.9 billion in local governments’ tax revenue in 2012 and were more likely to donate their money and time back to the community.

Blank-Torres said corporate businesses are essential to any city and provide many benefits, but small businesses leave much longer-lasting footprints.

Blank-Torres and Miller said Kyle and Buda pride themselves on being business-friendly cities and creating incentive packages that give small businesses a chance to succeed. For example, in August, Kyle rolled out its First Year on Us program that allows owner-occupied businesses to receive a one-time tax rebate of up to $10,000 for property improvements. Commercial property owners and businesses that are not owner-occupied are eligible for the same credit, but only up to $5,000 each.

“We really want to focus on and embrace [business owners] that want to come back to Kyle and grow those homegrown businesses because while we would all love to chase the white elephants, those are too few and far between,” Blank-Torres said in reference to Kyle being included in the bid for Amazon.com Inc.’s second North America headquarters. “The hidden gems are the one that, when you nurture them and grow them, they become something special.”

Starting a new venture at home

Theresa Jones, a Hays High School graduate and co-owner of Assemblage Contemporary Craftsman Gallery, said she had no plans to move back to Buda. After going to college and teaching and working in Texas, Florida, Georgia and South Carolina, Jones moved back to Texas for familial reasons.

“I’ve always considered the Hill Country home, but I never imagined I would come back to Buda. When I left, there was no Cabela’s, no Starbucks. There was a dotting of business here and there, but nothing [like] what it looks like now,” Jones said.

On the other hand, Assemblage co-owner Jacquie Martinez, also a Hays High School graduate, said she knew she would return home. After living in New Mexico for 12 years, she said she wanted to come back to Buda to spend more time with her family.

“The whole driving factor [of moving to Buda] was to simplify my life and to have a better quality of life; therefore I didn’t want to be in my car away from my daughter and my husband [driving] an hour each way

every day [from Austin],” Martinez said. “I didn’t want to be committed to any of that chaos that downtown Austin brought me. For [Jones and I] to work together and have fun and build our dreams together is why I came here.”

Martinez said despite popular belief, it is natural for people to want to move back to their hometown to live and work.

“I have a 14-year-old daughter and her perspective is that you leave and don’t come back, and that’s just not

true. You are young person. You are supposed to fly—go fly. But most likely you’re going to come back, and that is something that comes with age and experience,” Martinez said.

Mark Avilez, a Lehman High School graduate and hair stylist at Ladies and Gents Professional Hair Service, said leaving Kyle to attend the University of North Texas made him realize the value of Kyle.

“Kyle is a great place to eat, to grow up, to raise a family, and I guess that was what I was looking for. The town was growing and there [were] a lot of opportunities here that we didn’t have before, and I’d like to be

here to continue this growth,” he said.

Jones said she hopes the newer Hays CISD high school graduates see potential in their hometown and want to be a part of a developing community.

“There is a whole sense of pride of being involved and knowing that the economic development and everything else going on in the community, we are a part of that now,” she said.
SHARE THIS STORY