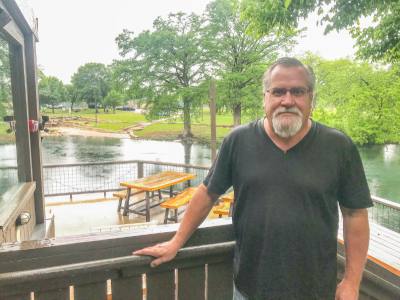 “I always call the San Marcos River the soul of the city because it is,” Gunnarson said. “It’s a blessing to be here, but it’s also a responsibility for us to be good stewards of the river. There’s a feeling of responsibility to be one of the caretakers of it.”

Gunnarson attributes much of the restaurant’s longevity to its location. He said that aside from the view it offers, the restaurant’s proximity to the river has connected the business to the community through a joint love for the city, its people and its natural resources.

“I don’t know if there’s such a thing as spirits, but you can feel the spirit of hundreds of years of community here,” he said. “The people have been living along this river for thousands of years, native people before the Spanish immigrated and people immigrated to Texas, this river was here.”

Ivar’s River Pub, which serves what Gunnarson describes as “homestyle comfort food,” offers traditional Southern dishes as well as options that have Cajun and Canadian influences. The pub is named after Gunnarson’s father, a Canadian immigrant who was a WWII veteran.

“We bring in a little bit of Canadian influence—that’s why we have the maple leaf on the logo,” he said. “And [the maple leaf] was also on my father’s business logo. So that maple leaf represents my Canadian heritage and also the business that we built here in San Marcos.”

Gunnarson was born and raised in San Marcos. And since he first opened the pub more than 20 years ago, he has seen the city experience exponential population growth and change as it develops.

“We’ve had many people who went to school here and used to come here, and they come back and bring in their children,” he said. “So I love that. In a very changing world, it’s nice to have some things that remain constant. I’d like to be that. It’s a great place to bring family and friends and just enjoy the beauty of San Marcos and this river.”