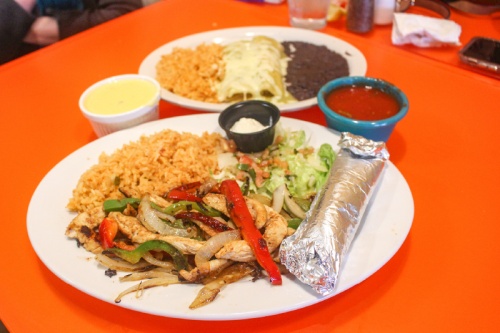 The popular Fajita dish is offered for $9.99.

“Before it was everyone who was born and raised here,” she said. But it wasn’t long before it changed. “New families have started coming in; that’s when we started getting busier and busier,” she said.

Coronado was born and raised in Austin, where she still lives, but back then she saw an opportunity in Buda, a town where her restaurant could be one of few to offer a full bar.

“That’s the reason I came in here,” Coronado said. “We were the only ones here with a full bar before Nate’s came.”

Nate’s—a cafe offering coffee, cocktails and light fare—opened in 2016 down the street at the historic Buda Mill & Grain shopping center. Along with the other shops that have opened, it was part of another trend in Buda—the revitalization of downtown.

Coronado welcomes them all—everything that draws foot traffic is good, she said—and enjoys participating in local events such as pub crawls, which take place this year on March 30 and April 13.

Super Slicks offers a large menu with Tex-Mex favorites, the most popular among them being Chicken Monterrey, various types of fajitas and a variety of enchiladas, all served either at the brightly colored tables that line the spacious interior or on the restaurant’s ample patio.

True to its origins, Super Slicks margaritas are a big draw for customers, and the restaurant offers them in a variety of flavors, including strawberry, peach, mango, prickly pear, pineapple, passion fruit, grape and mixed berry, not to mention less-usual choices such as Big Red and chamoy.

The future of Super Slicks is bright, Coronado said. In addition to hosting events and starting bottle service, she is working with V Media & Marketing Firm to increase the restaurant’s social media presence and is planning to build on its popular happy hours.

“We are going to be offering a lot more specials and events,” Coronado said.

Editor's note: the name of the marketing firm working with Super Slick's has been added to this post; it has offices in several Texas cities, not just Houston.