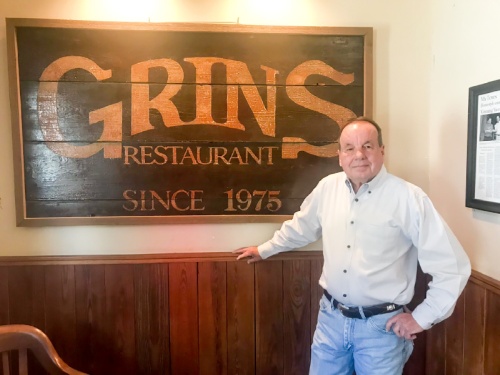 Owner Paul Sutphen was hired as a cook at Grins in 1975, when he was a senior in college.

When Grins opened its doors on Valentine’s Day in 1975, current owner Paul Sutphen was hired as the restaurant’s very first cook just as he was completing his senior year at Texas State, then known as Southwest Texas State. Now, 44 years later, after buying out one of the founding owners, Sutphen owns the restaurant along with his business partner and fellow Southwest Texas alumnus Johnny Ferrell.

“I think I’ve got a lot of empathy for every job here,” Sutphen said. “I still do a lot of dishes when we’re busy and so does my business partner, Johnny. I mean, it’s our job to do whatever it takes. That’s the joy of it. We’re here to make money, but we’re here to make an impact on people’s lives in San Marcos, too.”

The restaurant—originally a home built in 1948—could seat up to 60 customers in 1975 and was a local hotspot for live music. Since then, it has undergone three expansions and can now seat up to 250 customers.

Today, patrons can enjoy their meals on a balcony overlooking the university while enjoying a menu that includes the same homemade meals that served as the entire menu in 1975—nachos, hamburgers and draft beer.

“We’re consistent,” Sutphen said. “We still serve our classic 4-ounce and 7-ounce cheeseburgers, and they’re still our No. 1 sellers.”

Sutphen said he and Ferrell take joy in giving back to the city in which they grew up and built a business.

“We have an obligation to San Marcos,” Sutphen said. “I mean just to be a socially responsible business. One of our biggest charities is the Hays-Caldwell Women’s Center and the Hays County Food Bank; and we’ll support anything to do with Texas State, whether it’s faculty lunches or raffles—anything to do with students because that’s what got us here.”