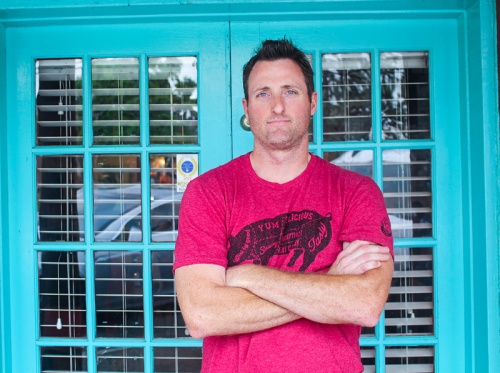 Greg Devonshire said you can tell what makes for a good barbecue restaurant by a few things: There is a wood pile in the back, the dining room is full, there is a long line of people waiting to order, and there is a smoky smell in the air.

As the owner of Milt’s Pit BBQ, Devonshire said smoking and serving barbecue is an art.

He said his love affair with barbecue began in college when he worked at a barbecue joint.

“I instantly fell in love with the restaurant industry,” he said.

After college Devonshire went to culinary school in Oklahoma City, then spent several years as a chef in both Oklahoma City and New Hampshire.

His wife’s family ties in Lockhart eventually brought them to Central Texas. Devonshire helped in the barbecue pit at Kreutz Market, where owner Keith Schmidt is a family friend.

In 2014 he took over Milt’s Pit BBQ from its original owners, Milt Thurkil and Bunny Walling, who started the restaurant in 2007.

Devonshire kept the restaurant’s name and added his own homemade rub to the meats, and four years later he often runs out of barbecue before his restaurant closes at 8 p.m.

He said this year he hopes to renovate the restaurant’s outdoor patio by building a new fence and adding a children’s playscape and seating. He said he is also working to get his Texas Alcoholic Beverage Commission certificate and plans to sell draft and canned or bottled beer.

The restaurant also offers full-service and delivery catering, which includes specialty items such as a loaded potato bar and a chopped beef sandwich bar.

And for those who are not fans of barbecue, Milt’s Pit BBQ also offers burgers, including a Roadhouse Burger with cheese and a mushroom Swiss burger.