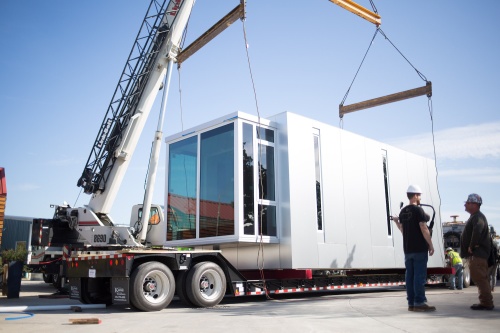 Editor's note: The print version of this story, published in our March edition, incorrectly labeled Buda and Kyle on the map infographic. We apologize for the error.

The population is not the only thing that continues to grow rapidly in the areas of San Marcos, Buda and Kyle.

According to the Austin Board of Realtors, in the past five years San Marcos saw a 52 percent increase in its median home sale closing price. Buda increased by 63.2 percent and Kyle by 60.2 percent.

With a steady decline in affordable housing in the area, developers such as Tiny Dwelling Co. developer James Stinson are looking for ways to diversify the housing market.

“[A tiny home] is a new type of housing. We want to be the place that people can come and buy the right-size housing that fits their needs, so someone doesn’t have to take on a roommate or an uncomfortable living situation just so they can afford that traditional 3-bedroom, 2-bath house being produced right now,” Stinson said.

In a 2017 study done by Harvard University’s Joint Center for Housing Studies, nearly 39 million American households are considered financially burdened by housing costs because they spend 30 percent or more of their income on housing.

Austin Board of Realtors President Steve Crorey said trying to  figure out how to manage growth along the I-35 corridor and still give everyone the ability to afford buying a home has been challenging.

“It’s kind of an anomaly,” Crorey said. “The standards of the norm from historical past [is] when you have more inventory, usually that equates to lower prices. In this particular case, we’re gathering more inventory from many of the new builds, but we’re not seeing price drops and that’s mainly because demand is still a factor. So even though inventory is increasing, the demand is still there, [and] that’s going to continue not having an opposite effect on prices.”

After being priced out of Austin and moving into a manufactured home in 2015, Amanda Sullivan and her husband, a San Marcos couple with one toddler, have been actively looking for an home in the $150,000 price range for a year. However, they said they are having trouble finding a home within their price range while also putting their current home on the market.

Using a real estate agent, Sullivan said she hopes her family will be able to stay in San Marcos, but after a year of searching, she is not feeling so sure.

“We’re trying really hard to stay here, but the market is pushing us out towards San Antonio,” Sullivan said. “We didn’t anticipate having such a low budget, but with our income, it’s put us in a situation where we have to look at $150,000 or not get a house because we won’t be able to afford the property taxes, insurance and everything that goes into [buying
a house.]”

Crorey said it is difficult for single people between the ages of 18-30 to find homes within their price range and advises homebuyers to get prequalified for a mortgage first so they know what they can afford.

“A lot of people drive around and see a house for $250,000, and then after that they realize they can’t afford it. It is becoming an issue where you have to have good-paying jobs in those areas. In some cases you practically have to be a married couple with two incomes to be able to afford a home in the $250,000 price point,” Crorey said.

For people who currently own a home like the Sullivans, Crorey said affordable housing can still be a challenge when they are ready to move even if they have built up equity.

“It is an issue for a lot people that have been in their homes for a long time and then realized they’ve got good equity, but in order to have the same mortgage payment, either you going to have to put [money] down on [the new home] or move further out,” Crorey said.

Located near downtown Kyle in the extraterritorial jurisdiction, the location was chosen because of Kyle’s affordable housing market and proximity to Austin, Stinson said.

“We think that Kyle’s housing market is prime for what we are doing,” he said, pointing to Amazon.com Inc. and Texas State University employees as well as Austin and Kyle residents as potential buyers. “We’re already starting to see that Kyle’s prices are getting too expensive for people. Kyle presents to us the opportunity to buy land and still keep that cost affordable for people.”

Along with a full kitchen, bathroom with small shower, and ground-floor bedroom, buyers can add a washer/dryer unit and dishwasher.

Crorey said tiny homes could offer a good housing mix especially for those who could not afford a home in the $250,000 price range and are willing to sacrifice the size of the home for something they can afford.

According to Stinson, the planning stage should be finished by mid-March, and construction will begin in April. Tiny Dwelling Co. is allowing people to reserve spots and schedule unit walkthroughs.

According to the American Planning Association, tiny homes are not specified as a separate housing unit in most city zoning ordinances

Stinson said cities, with good reason, are leery of any new housing that disrupts the norm but hopes that after they see the quality of the homes, cities will be more accepting of the tiny home movement.

“A lot of small cities say they want affordable housing, but when we bring them projects that provide affordable housing the attitude in the budget offices may be, ‘[Tiny homes] don’t have enough tax base to justify them.’ Cities have to outweigh having to invest in infrastructure off-site, creating roads, et cetera. There are a lot cities that are not up to the idea of a tiny house development yet,” Stinson said.

Sparks said Buda would not have to amend its code greatly to allow for tiny houses on foundations or, as he prefers to call them, “small cottages,” because “it conveys permanence, compliance with building codes and a construction method involving a permanent foundation” in the city.

“[Buda] is open to smaller housing types,” Sparks said. “The city is generally supportive of providing as much healthy, quality and safe housing choice as possible. This means that a small cottage would be reviewed and considered much like any other residence in the city of Buda, subject to the same residential design requirements, regardless of whether the house is 500 square feet or 5,000 square feet.”

Kyle Director of Planning Howard Koontz said the city does not have anything in its code that addresses the “recent phenomenon” of tiny homes or microhouses.

However, Kyle Mayor Travis Mitchell said he sees potential in the project being an affordable housing alternative in Kyle and hopes the city can work with the developers in the future.

“My perspective is that this development could become a model for affordable housing. My idea is to say, ‘Let’s partner with this developer. Let’s put something that’s sustainable and long- term that the city can have an interest in and create a solution for the affordable housing issue in Kyle,’” Mitchell said. “The problem is, if it turns into what it might—which is essentially just a sprawling hyper-dense trailer park—that doesn’t really solve the affordability problem because it puts the neighborhood almost immediately on to the trajectory that leads to blight.”

According to Stinson, the company has followed all the avenues from engineers to planning departments with the Hays County development process.

For San Marcos, Planning Manager Abby Gillfillan said the city is open to tiny homes, although meeting the city’s code standards would depend on the type of home. Factors include the lot size, whether there is a permanent foundation and whether it is used as an accessory dwelling unit.

Still on the hunt for a home, Sullivan said at the end of the day she is not picky as long as it is in a safe neighborhood and a good school district.

“For someone like me and my husband, we are in our late 20s and we’ve got a very young child, and our situation, [like] a lot of our friends’ situations, is we’re just [struggling] to make it to where we can stay where we want to be,” Sullivan said.