As the virus crept into the state, it shut down multimillion-dollar events such as South by Southwest Conference & Festivals that have historically generated revenue that bleeds into local economies such as Buda’s and closed international borders that have stopped much overnight leisure travel in various cities in the county. It has left hotel owners scrambling to keep afloat. Vic Patel, CEO and director of operations and revenue of San Marcos-based Haven Management Services, said his hotels experienced an 80% drop in business for both April and May.

“Honestly the hoteliers, restaurant and business owners, we don’t even know what to do,” Patel said. “Right now we’re about 50% down [in business] and expect to stay this way for the rest of the summer and expect to drop back to 60% after that.”

Patel said he is operating his hotels with a lean staff team and cannot afford to make any more cuts, even if it means saving money.

“I am personally staying afloat by multitasking. I have a lot of managers that are becoming dual-managers, cross-training—trying to cut payroll,” Patel said. “But at the same time there’s only so much you can cut down, my staff went down by 30%, but there are no more cuts that can happen at this point.”

• Realtors work to meet demand of homebuyers in Hays County

Some city officials along the I-35 corridor have jumped into action to help hoteliers stay above water as coronavirus ravages the economy.

On March 20, the city of Buda deferred hotel occupancy tax payments for March 20 and April 20 for 60 days. In addition, on April 7, Buda City Council members voted for a tax-forgiveness program as part of its Still Budaful Stimulus Program, forgiving up to $5,000 in taxes owed by hotels for the month of March and April.

The hotel occupancy tax collected from local hotels is used only to directly promote tourism and the convention or hotel industry. The revenue of hotel tax funds is used on projects or events that promote visitors, such as visitors centers, advertising, historical restoration, sporting events and qualifying sporting facilities, among others, according to the Texas comptroller of public accounts.

Prior to the coronavirus outbreak, the city of Buda had a hotelier incentive program in place that reimbursed hoteliers for room discounts and any incentives that brought group stays to the city, and in order to further the financial relief on hotel owners, Buda City Council members voted to allow all reimbursable uses for hotels under state law in the program.

According to Buda Director of Tourism Lysa Gonzalez, allowing all of the reimbursement uses under state law gave hoteliers cash flow that allowed them to keep operating during the shutdown. All hotels in Buda requested to get reimbursements for advertising, according to Gonzalez.

“Buda was one of the first—if not the first—city to do this for their hotels,” Gonzalez said when explaining the financial relief programs in place to aid local hotel owners. “We’ve had a lot of other cities contacting us and asking us how we did it; so we know that there are other cities that are considering following the approach; the Hotel Incentive Program is something that they’ve been very interested in putting in place to help hotels in other communities.”

According to Gonzalez, hoteliers in Buda appreciate the quick response the city took to provide a financial relief program.

The city of San Marcos took a different approach to aid hotel owners. On April 7, the city passed a temporary ordinance to allow hotel owners a 90-day extension to pay taxes without penalties and fees for April, May and June. On June 16, the city extended the ordinance to include July.

In addition, the city of San Marcos waived utility fees for up to 90 days for businesses impacted by coronavirus.

“We don’t know what to predict. We still have fixated costs; we still have to pay the light bill, pay the mortgage; that isn’t going away—waiving fees won’t do much,” Patel said.

In Kyle, Director of Communications Samantha Armbruster said the city has not developed a plan that has directly helped hoteliers, but officials are working with the county to roll out an economic relief program that will benefit local businesses, including hotel owners.

Armbruster added: “Nothing is official; everything is still in the works.”

Cities see a loss in revenue

Before the coronavirus pandemic hit, the city of Buda had projected a hotel tax revenue 32% higher than the revenue generated last year. Now, the city projects a shortfall from the budget in hotel tax revenue of 42% for the month of March and April.

Similarly, San Marcos is preparing to brace for a decline of $1.68 million in hotel tax revenue from a projected revenue of $3.99 million.

Rebecca Ybarra-Ramirez, San Marcos director of destination services, said the multimillion-dollar deficit the city will be facing will impact programs associated with tourism.

The city of San Marcos does not have any capital improvement projects currently being funded by hotel tax funds, but Ybarra-Ramirez said the recovery for the hotel tax revenue deficit is anticipated to take three years, mirroring the timeline of the industry’s recovery at a national level.

Kyle Director of Finance Perwez Moheet told Community Impact Newspaper in a statement that the city projects a loss of $157,725 in hotel tax revenue from the budgeted projections.

According to Armbruster, the revenue loss that the city of Kyle is projected to have will not have much impact, as the city’s hotel tax funds do not represent a large part of the budget.

Unlike its neighboring cities, Buda has a capital improvement project that will be affected by the hotel tax revenue shortfall.

Turning the former Buda Public Library into a visitors center is Buda’s only capital improvement project—with an estimated cost of $638,173 or up to $841,450. At the current estimates, the project could leave the fund balance at $414,000-$489,000. No money from the general fund would be used for the project.

According to Gonzalez, hotel owners in Buda are “very thankful” for all the help the city has given them, though hotel owners from neighboring cities, such as Patel, do not share the same consensus from their elected officials.

Patel said he hopes to see more inclusion between San Marcos City Council members and local business owners to come up with proactive solutions to keep businesses afloat—something similar to the programs in Buda.

“We need to work together to get through this and come up with working solutions to get through this because businesses are suffering at catastrophic levels, and if we’re not working together we won’t be able to make it through this.”
City of San Marcos City of Buda City of Kyle Hays County San Marcos-Buda-Kyle Coronavirus (COVID-19) Still Budaful Stimulus Program Rebecca Ybarra-Ramirez Lysa Gonzalez Perwez Moheet Vic Patel
SHARE THIS STORY

Evelin Garcia covers local government, education, business and development as the reporter of Community Impact Newspaper's San Marcos/Buda/Kyle edition. Evelin is a graduate of Texas State University's School of Journalism and Mass Communication with a minor in international studies.

A survey conducted in April by the National Independent Venue Association reported 90% of independent venues across the country are likely to close by fall if conditions persist. 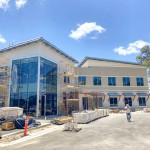 The child care facility will provide services for children 18 months through 6 years of age.