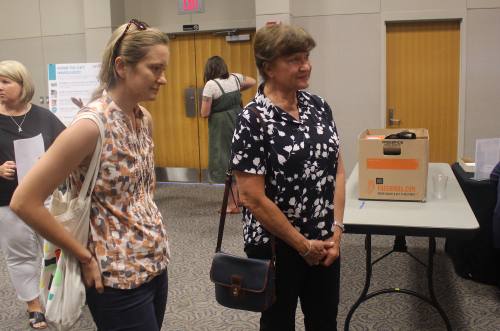 Sarah Simpson, who works in San Marcos, attended an Aug. 14 open house hosted by the Workforce Housing Task Force with her mother, Patricia, who has lived in the city since 1989.

San Marcos’ Workforce Housing Task Force is holding its final meeting Sept. 12 and is preparing to take its action plan to the city’s planning and zoning commission for approval.

The housing task force was first formed in September 2018 to address a lack of housing that was affordable for more of the city’s workforce. After presenting the final version of its action plan to the planning and zoning commission on Sept. 24, the San Marcos City Council will review the document on Oct. 15.

The final meeting of the task force, which is open to the public, will take place from noon-2 p.m. at the San Marcos Activity Center, located at 501 E. Hopkins St. in San Marcos.

A draft of the action plan, which was published online in June, has been presented to San Marcos residents at multiple open house meetings. The task force, made of 19 representatives from different organizations, had been gathering public input on the draft.

The task force has also been hosting meetings to better inform residents on some of the strategies that have been developed by the group, including a seminar on land banking.

Laura Dupont, who served as the chair of the task force, has told Community Impact Newspaper that housing needs in the city can only be filled with the cooperation of residents and city leaders.

According to the release the final draft of the action plan includes four goals, six strategies and 23 specific actions designed to bring in more affordable housing into the city.

“The plan incorporates feedback from 15 Task Force meetings and working groups and two open house events. The total citizen participation in the plan includes input from 749 individuals through community conversations with over 38 different organizations, as well as 200 written comments and 100 stories from the community,” the release stated.