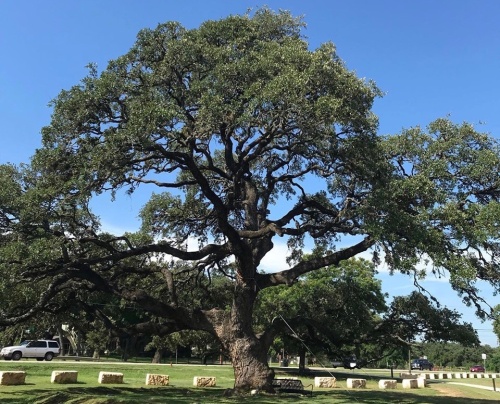 After collecting nearly 500 votes, the Friends of the Buda Library and the city of Buda held a ceremony on Aug. 24 to name the large oak outside the municipal complex. The official name is Guardian Oak, which received more votes than the other four choices: Rolling Oak, La Viuda, Widow’s Oak and Ancestor’s Legacy.

The tree, which measures around 53 inches in diameter and is estimated to be around 260 years old, stood in the footprint of the public safety building—part of the municipal complex— before it was built. Under city code, trees that are more than 20 inches in diameter are protected as heritage trees, so cutting it down would have not only meant losing the tree, but having to plant more trees elsewhere to replace it.

Instead, in 2016, Buda City Council approved funding to relocate the tree. Initial estimates put the cost at over $300,000 but after negotiations $232,167 was enough to hire a company to move the tree and monitor it in the months following. The move took place in February 2017.