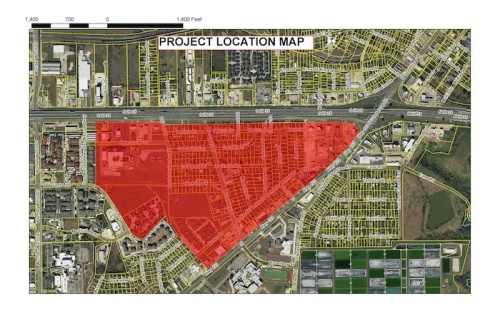 The city of San Marcos has scheduled a July 23 open house to hear concerns or information regarding flooding and roadway issues in the Sunset Acres subdivision in San Marcos.

To get a better idea of flooding and roadway improvements needed in the Sunset Acres subdivision, the city of San Marcos is hosting an open house July 23 in preparation for an engineering report to guide its construction plans.

The open house will begin at 5 p.m. inside the cafeteria of Owen Goodnight Middle School, located at 1301 Hwy. 123.

Project information on the city’s website states that Sunset Acres, a neighborhood situated at the southwest corner of I-35 and Hwy. 123, has “historically experienced localized flooding issues,” adding that conditions of several roads in the neighborhood are partly responsible for flooding and drainage problems.

Broadway Street, due to its frequent use as a crossway between I-35 and Hwy. 123, has been highlighted within the scope of the improvement project, which could start construction as early as July 2021.

According to a July 19 press release, the city is planning to add a 12-inch water line along Patricia Drive, along with a 6-inch wastewater line along Parkdale Drive. Road closures are expected in the neighborhood once construction begins on the project. The city’s is aiming to finish construction in the subdivision by July 2023.

City officials have told Community Impact Newspaper that the project is still in its conceptual design phase, and that the open house is an “information gathering” meeting that will aid the city’s preliminary engineering report.

Designs for the improvement project are projected to be completed by March 2021. Approximately $200,000 has been used during the design phase so far, which city officials said is “on budget.”

Representatives from Plummer, the city’s engineering consultant on the project, along with city engineering staff will be at the open house to discuss where residents are experiencing flooding and drainage issues, along with other project-related concerns.
SHARE THIS STORY