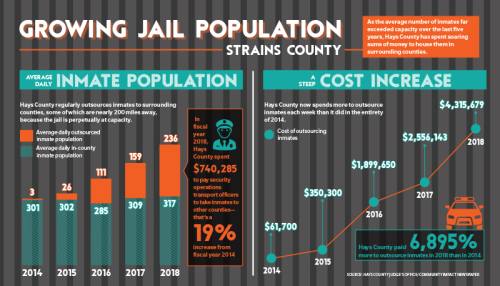 As the average number of inmates farnexceeded capacity over the last fi venyears, Hays County has spent soaringnsums of money to house them innsurrounding counties.

Faced with the reality that the county is bleeding an average of approximately $10,000 to $15,000 a day to outsource inmates, Hays County Judge Ruben Becerra in March formed a new task force on criminal justice to bring community stakeholders together to figure out how to lessen overcrowding and, ultimately, make the jail more cost-efficient.

Becerra’s task force was short-lived—at least as a task force of the county judge’s office. Now the same group will continue pursuing their original mission, but this time it will be as the Hays County Criminal Justice Coordinating Committee.

The road to establishing a criminal justice committee

The change came after an April 2 meeting where Commissioner Lon Shell pointed out that the commissioners court had already formally established a group known as the Hays County Criminal Justice Coordinating Committee years ago—and that the committee had the benefit of being an official body of the Commissioners Court while also having a near identical mission to Becerra’s task force.

Shell, who has been a prominent member of the original version of the committee for nearly a decade, admitted that the group had not been very active in the past couple of years.

And Shell said that while he appreciates the renewed energy and attention Becerra has brought to the county’s criminal justice system, he is not willing to step aside as a contributor to the effort of optimizing it.

Ultimately, in the interest of not duplicating stakeholders’ efforts by doing the same work in both a task force and a committee, the commissioners unanimously voted on April 9 to convert Becerra’s task force into a new iteration of the Hays County Criminal Justice Coordinating Committee.

Shell and Commissioner Debbie Ingalsbe were appointed to represent the court on the committee alongside other stakeholders who were already appointed to Becerra’s task force, including justices of the peace, judges, prosecutors and law enforcement officials.

Now that the committee has been formalized, Becerra said the group has its sights set on addressing all the ways in which the county could make not only the jail, but the entire county criminal justice system more cost-efficient.

“I believe there are other factors [besides inmate population growth] involved for sure,” Becerra said of the skyrocketing jail costs. “We believe that it’s missed opportunities in general.”

The committee’s first meeting occurred April 3. It was a closed meeting, but Becerra said future meetings will likely be open to the public.

“The whole goal with having a private meeting is just to get commitments without posturing or without particular people saying things they don’t really mean or don’t think they’ll actually follow through on or are uncomfortable talking about things that could be viewed as a black eye in their office,” Becerra said. “So that was the reason [it was closed]—so that we could create a safe space, if you will, for conversation.”

When asked, county officials do not give just one reason for the consistent overcrowding of the Hays County Jail, instead they say there’s a myriad of contributing factors like a too-slow adjudication process and a limited amount of space. Becerra said the county jail’s overcrowded conditions could be reduced some if, when applicable, local law enforcement used cite-and-release more often.

Cite-and-release is a practice where officers are empowered to, by their discretion, give misdemeanor offenders a ticket rather than arresting them and taking them to jail.

“An easy [missed opportunity] to point to is cite-and-release—we’re not doing all that we can with cite-and-release as a county, as municipalities, as every person that’s out there on the field,” Becerra said.

Sheriff Gary Cutler said he, too, believes in the importance of cite-and-release, something he said he has emphasized since his first few months on the job in 2010.

“What we’re finding out, and we monitor [cite-and-release] closely, and it works; but we find out that maybe 40 percent of the inmates do not show up when given their date they need to be here and then we have to get a warrant for arrest for them and go look for them,” Cutler said, noting that while cite-and-release does help lessen overcrowding in the jail some, it does not solve the issue altogether.

Becerra said the committee will do cost-benefit analyses to vet potential efficiency solutions—the first of which he said will likely pertain to the possibility of establishing a public defender’s office inside the jail itself.

Hays County Chief of Staff Alex Villalobos, who was formerly a lieutenant at the Texas State University police department for more than 10 years and currently sits on Kyle City Council, will serve on the committee as Becerra’s representative.

Villalobos said the committee’s purpose, at its core, is to thoroughly examine every level of the county’s criminal justice system and identify ways to improve it. He said initiatives will begin to take shape once the committee determines its top initial focuses and creates subcommittees for each to identify cost opportunities in the jail and consider and analyze possible solutions.

The committee, Villalobos said, is going to conduct a SWOT analysis—where strengths, weaknesses, opportunities and threats are considered—at every level of the county’s criminal justice system. He said the subcommittees will update the Hays County Commissioners Court on their findings and make recommendations on potential solutions to pursue. It will then be up to the county commissioners to give direction on action to be taken.

“I know that we don’t want to look at this from a deficit model, we want to look at it from a positive forward-thinking model,” Villalobos said. “And we see all these things as opportunities just to do things better and to be more efficient and to bring in what we can to continue to improve upon what we’re doing already. Already we’ve seen positive willingness to support some changes in this very delicate and critical area of county government.”

The road to decreasing the cost of the jail will not be an easy one. Cutler said that although the sheriff’s office is fully equipped to run the jail at its current capacity, there will be a considerable need for more staff soon.

The jail is currently under expansion to add 192 general population beds, a project that is expected to be complete by next March. Cutler said although county staff does not yet have an estimate on how much money it will cost to hire the additional correctional officers necessary to stay in compliance with the officer-to-inmate ratios required by law, he does not believe the ability to keep more inmates in-house will be fully offset by outsourcing fewer inmates.

Villalobos said these are issues the committee will consider as it looks for the best path forward.

“Well we have a very distinct issue, right?” Villalobos said. “Because we have a jail that’s expanded to a certain degree and we have a current population that goes beyond the capacity of the level of which the jail has been expanded to. And I think we need to be creative in how we address those defendants and how we address the overall administration of criminal justice.”

Becerra said the committee is made up of officials and people in positions of power in the criminal justice system because he hopes that will expedite progress. He added that there will be several opportunities for the community to offer their input to the committee.

“It’s very important to us to get the people that have the ability and the statutory authority to do the things that we think are important and necessary,” Becerra said. “And so, with that said, the shaping of the criminal justice [committee] has been strategically chosen so that the ideas that come forth will actually have legitimate buy-in and engagement from the offices that they serve.”

Cutler attended a March 8 summit hosted by Becerra ahead of the official formation of what was, at that time, the task force. Attendees included municipal, university and county law enforcement as well as prosecutors, public defenders, the district attorney and other stakeholders.

“Forming this committee lets people know we want to do what’s right for criminal justice here in Hays County, and it gives us a way to take a good look at it from different views,” Cutler said. “I think it’s a win-win. I don’t see how it could not be successful as we all put eyes on our criminal justice system here in Hays County and address the issues we’re faced [with] here. I think it can work, I really do.”