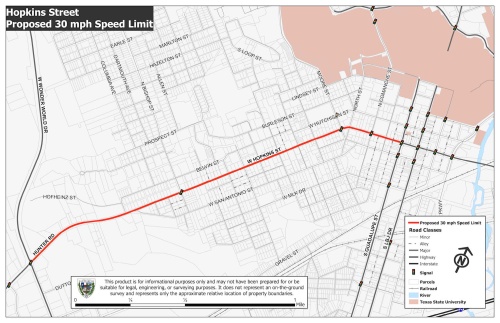 San Marcos City Council voted unanimously Tuesday to reduce the speed limit to 30 mph from 35 and 45 mph along the section of Hopkins Street and Hunter Road between Guadalupe Street and Wonder World Drive.

Along this part of Hopkins and Hunter, a combination of historical, residential, restaurant and retail properties generate significant bike and pedestrian activity, according to the transportation department.

"That section is highly used by bicyclists and pedestrians," Council Member Lisa Prewitt said. "I bike it on weekends all the time. When the far right lane on Hunter Road turns and ends into the [Purgatory] apartment complex, it can get a little risky there. So, I think taking it down to 30 mph—if we're really trying to create this walkable, bikeable environment—is a great thing."

Council Member Jane Hughson said the city has also completed other efforts to decrease traffic along the section. Since San Marcos assumed control of this part of Hopkins and Hunter, the city has implemented a truck weight restriction and plans to reconstruct Hunter to include additional traffic-calming elements, such as narrow lanes, raised crosswalks and improved sidewalks.

"You have a 45 mph sign, if you're heading east into town, right before the entrance of Jack's Roadhouse, and then maybe 15 feet away you have a 35 mph sign, which is a real abrupt drop," he said. "There has to be a different placement of the speed limit signs, and there has to be more of them on the stretch of Hunter Road from Wonder World Drive to San Antonio Street. I don't want [San Marcos] ever getting labeled as a speed trap town since people are accustomed to the already-established speeds."

A speed limit change must be approved by ordinance and requires two readings by City Council. The second reading is scheduled for council's Sept. 4 meeting.

The city expects to allow a two- to three-month grace period for drivers to adjust to the new speeds after signs are implemented.