In state of the city address, San Marcos mayor urges vigilance in the face of growth 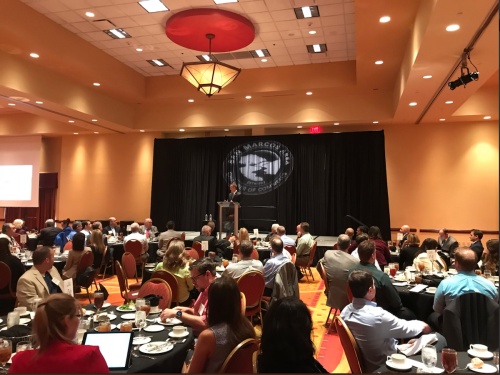 Growth was on everyone's minds—including the mayor's—on Thursday during the annual San Marcos State of the City address.

"The reports of tremendous growth in this city are not exaggerated," Mayor John Thomaides said at the San Marcos Area Chamber of Commerce event.

Thomaides said some projections showed San Marcos at a population of 85,000 "sometime in the next decade."

"With this growth, we must remain vigilant in our efforts to keep the unique character and charm of our city intact and protect the natural beauty we all love," he said.

Thomaides has spent much of his two years as mayor alongside the six City Council members trying to adopt a new land development code, known as Code SMTX, which has been in the works for nearly four years and is set for final approval in April.

"We must do better," Thomaides said.

In 2014, the city adopted its affordable/workforce housing policy that included goals such as increasing the homeownership rate, encouraging the creation of a diverse housing stock, reducing builder costs for owner-occupied housing and encouraging infill development in existing neighborhoods.

Thomaides said the city is trying to receive federal and state transportation funding to increase public transit options and is looking into regional mobility partnerships. The city currently has one bus system that travels seven routes during the week, and Thomaides said routes could be expanded in the future.

Earlier this year, the city and Texas State University also issued a joint Request for Proposal to bring bike -and car-sharing to the city.

Thomaides said driverless shuttles were not out of the realm of possibility for San Marcos and that the city needs to prepare its infrastructure for such technology in the near future.

The need for increased public transit comes at a time when parking is scarce is in the city. In an effort to facilitate parking turnover downtown, the city in February began using license plate recognition software to enforce two-hour parking around the square. City officials have discussed possibly adopting paid parking in the future as well as adding a parking garage to the downtown area.

During his address, Thomaides also touted the council's achievements in dedicating more money toward stormwater management to tame what he called a "lifelong struggle" of flooding in the city.

Over the last three years, the city has received millions of federal disaster recovery funds to help repair damage done during the two 2015 floods. In September, San Marcos City Council approved a 15 percent drainage utility rate increase to pay for $66.1 million in drainage improvement projects over the next five years.

City staff is also examining the way drainage utility rates are calculated and determining whether there’s support for changing it, possibly to a structure such as the one the city of Austin uses. Austin calculates rates individually for each property based on the amount and percent of impervious cover rather than based on their lot sizes, which is how San Marcos currently calculates the fee.

Thomaides closed by stressing the importance of partnerships between the city, the chamber, the Greater San Marcos Partnership, San Marcos CISD and Texas State University as a way to continue job growth in San Marcos.

"San Marcos remains a vibrant and growing city with a hometown feel that appeals to people of all ages, young professionals, growing families, students and active adults," he said.

In his State of the School District address, SMCISD Superintendent Michael Cardona stressed the importance of getting students ready for college, a career or the military.

In the 2015-16 school year, 74.7 percent of SMCISD graduates were considered college and career ready, just below the state average of 75.9 percent, according to the district's academic performance report.

"If we don't prepare our kids to be ready to do what it is they want to do, this city will suffer," he said. "Everything is affected by what happens in the public school system."