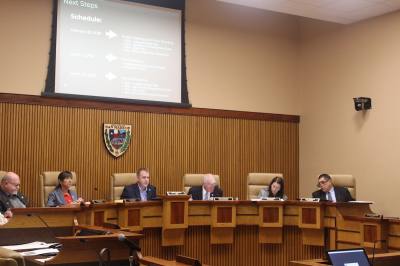 The vote comes with a slew of proposed amendments on everything from more restrictions on accessory dwelling units to changing the name of certain of zoning districts.

"I trust that we’re going to get this worked out before we get this voted on [second reading]," Council Member Melissa Derrick said prior to the vote.

At the heart of some council members' and citizens' apprehension in passing Code SMTX is the Neighborhood Districts, a suite of new zoning regulations that city staff say will replace the current options for medium and high-density residential neighborhood commercial development in existing neighborhood areas.

According to the Code SMTX final draft, Neighborhood Districts are intended for infill or redevelopment in areas that have a mix of existing residential and commercial buildings, such as in the Willow Creek neighborhood or northwest of Texas State University.

Under the proposed new regulations, there are limits on the number of attached units allowed, more parking standards, more appropriate height limits and more options for small, narrow lots and large or irregular lots.

Residents and council members have raised concerns about their neighborhoods not being protected and preserved, prompting some to call for Neighborhood Character Studies—aimed at ensuring that "each neighborhood maintains its existing character and follows development and redevelopment patterns desired by the residents", according to the draft code—to be conducted before Code SMTX is adopted. City staff has reccomended Neighborhood Character Studies be performed after Code SMTX's approval.

Some council members want to define Neighborhood Character Studies further before adopting the code, and a March 6 City Council work session aims to do that.

"We have to deliver some predictability and we have to gain the trust back in the community," Council member Lisa Prewitt said. "I don’t think [Neighborhood Character Studies] are going to take that long once we define what they are."

In an effort to quell concerns about protecting existing neighborhoods further from incompatible development, city staff has suggested prohibiting developers from requesting any zoning change above the least-dense Neighborhood District zoning—ND3—if the majority of properties surrounding the proposed rezoning are single-family homes.

Council members spent a lot of time on the so-called single-family buffer, with Derrick expressing interest in tying the completion of Neighborhood Character Studies to a developer's ability to request a rezoning in the majority of the Neighborhood Districts.

Under the proposed code, all developers requesting a rezoning to a Neighborhood District would have to submit a regulating plan that outlines specifics on what and where they plan to build, from building type and parkland to street network and construction schedule. Council members have also requested more clarification on what a regulating plan is.

Under the proposed code, developers submitting a rezoning request must also meet with surrounding neighbors and present their plan for development.

Council members are slated to vote on the second reading for Code SMTX's adoption on March 20.
SHARE THIS STORY