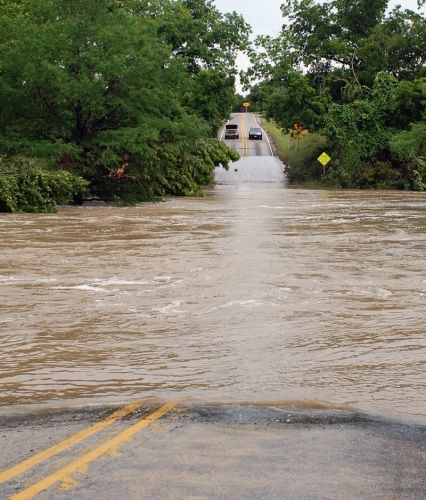 Flooding like the one pictured here, at the Onion Creek double crossing of RM 150 in Hays County, have become familiar along Flash Flood Alley.

There is no longer such a thing as the storm of the century.

That is according to an October study by the Proceedings of the National Academy of Sciences,  which shows that storms of Harvey’s magnitude are more likely to occur as climate change progresses.

As many cities in Texas continue to rebuild after Hurricane Harvey, and as cities in Hays County continue to recover from two historical 2015 floods as well as a handful of other rain events that caused damage over the years, the obvious questions by area officials and residents are, “When will this happen again?” and “What are we doing about it?”

"We need to recognize that it is going to be a new normal. It will be new and different normal for this entire region," Gov. Greg Abbott said during a press conference about Hurricane Harvey on Aug. 28 as hundreds of Texans evacuated their flooded homes.


Adapting to the new normal

According to the study, produced by MIT professor Kerry Emanuel, Texas had a 1 percent chance of experiencing rainfall of Harvey’s magnitude for any given year between 1981 and 2000. By the end of this century, the annual probability of Hurricane Harvey’s record rainfall returning to Texas will rise to 18 percent, if the growth of greenhouse gas emissions to the atmosphere continues unmitigated.

No stranger to heavy rainfall, Hays County sits in an area of Central Texas nicknamed “Flash Flood Alley”, where the Balcones Escarpment—which extends from Waco to Del Rio—marks the beginning of the Hill Country to the west.

Over the past several years, cities that straddle Flash Flood Alley have identified ways to deal with the new normal, although engineers say no amount of mitigation and prevention can predict a flood like Harvey, even with experts’ forecasts of higher occurrences.

Efforts are underway in San Marcos to mitigate the chances of a Harvey-esque flood in the future.

Hurricane Harvey was considered—by some reports—a 1000-year flood, which means it had a .1-percent chance of occuring.

The standard in San Marcos is for the city storm drain system to be able to carry the amount of rainfall that comes with a 25-year storm—a four-percent chance of occurrence in any given year—according to San Marcos Director of Engineering Laurie Moyer. She said the city wants to be able to carry up to a 500-year event within either the stormwater system or the right of way.

“There's a whole bunch of the city that was built way before we tried to have this standard,” she said.

The city has developed more stringent regulations for what can be built in the flood plain. In addition, the city recently increased the elevation at which residential structures must be built from 1 foot above the 1-percent flood level to 2 feet above that level.

In September, San Marcos City Council approved a 15-percent drainage utility rate increase to pay for $66.1 million in drainage improvement projects over the next five years.

Moyer said in 2018, city staff will examine the way drainage utility rates are calculated and determine whether there’s support for changing it, possibly to a structure such as the one the city of Austin uses. Austin calculates rates individually for each property based on the amount and percent of impervious cover rather than based on their lot sizes, which is how San Marcos currently calculates the fee.

Meanwhile, five projects—outlined in the map to the right—were prioritized to be completed using $33.8 million in federal disaster recovery funding San Marcos received following the 2015 floods.

In Buda, work is ongoing on the drainage projects approved by voters in 2014. The projects are currently in the design phase, according to Nett.

Buda City Council in December approved an agreement with Water & Earth Technologies, Inc., to purchase equipment—with the help of a $585,780 TWDB grant—that will monitor precipitation, stream levels, and rising water at five designated low-water crossings. The project will be completed by Aug. 31, according to a news release.

Soon, cities along I-35 and Hays County will also have updated Federal Emergency Management Agency flood plain maps that show where it is risky to build for fear of flooding.

The map appeal process, which starts Jan. 24, gives property owners and officials a chance to dispute certain parts of the map, such as sizes of lots and street names.

This story is one update from The January Issue. View the full list of top 5 stories to follow in 2018 here.