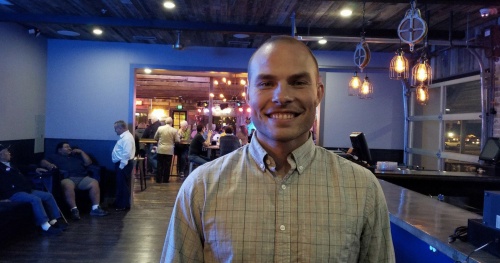 Travis Mitchell invites guests to the Railhouse for an election watch party.

Update: While votes have not been canvassed, Travis Mitchell received 963 out of 1,622 votes making him the Kyle mayor-elect.

Update: With nearly all the votes accounted for, Travis Mitchell has claimed victory in the race for Kyle mayor.

At his election watch party Mitchell said that he was grateful for his city's support and looks forward to leading Kyle in a new direction.

"I honestly didn't expect to be as far ahead as I am, but I'm very thankful," Mitchell said. "I'm hoping the days of citizens of Kyle saying that the city of Kyle is not transparent is behind us. I want to bring something new as the role of mayor to the city. A lot more outreach and a lot more engagement and leadership to this city."

Mayoral candidates Bill Sinor and Jamie Sanchez were unavailable for comment, but candidate Nicole Romero-Piche siad this would not be the last time she is active in city government.

"For my first race, just to know that there's people out there that believe in my vision as much as I do and are willing to take time out of their day to vote to say it as well is really awesome," Romero-Piche said. "I'm not done. The average female politician in her first race is in her late 30's. I'm only 33. It's what's next and about finding the right race, finding where I go next, and this time I might buy a few signs."

Original: Shortly after the polls closed at 7 p.m. today, early voting and unofficial vote totals showed Kyle mayoral candidate Travis Mitchell is leading in the race for the mayor's seat.

Community Impact Newspaper will update this story throughout the night.
SHARE THIS STORY