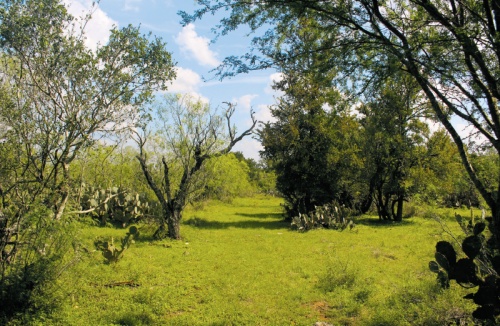 The San Marcos River Foundation wants to preserve 330 acres to mitigate flooding, and it is asking for the cityu2019s help to do so.

With growth at the top of the community’s mind, the city of San Marcos is considering purchasing nearly 330 acres of undeveloped land in the Upper San Marcos Watershed for preservation and flood mitigation.

But a tight fiscal year budget, millions of dollars of debt issued, and several hundred acres already purchased or in negotiations by the city for land preservation has some city officials wary of spending up to $4.4 million on new land that was not budgeted.

“For me this is not an issue of whether we’d like to acquire the property or not,” Mayor John Thomaides said during City Council’s discussion on whether to apply for a $4.4 million loan with the Texas Water Development Board for the area. “It’s, ‘Can we afford it?’”

City support
The land in question—located within the Sink Creek drainage basin, which drains directly into Spring Lake, the headwaters of the San Marcos River—is owned by the San Marcos River Foundation, a nonprofit that works to preserve and protect the river. The organization says since the area is situated in the Edwards Aquifer Recharge Zone, it must remain clear of development and impervious cover so water can flow into the ground and protect the city from flooding.

The SMRF purchased the two tracts of land through loans from the Conservation Trust, a national environmental nonprofit, and now, SMRF is looking for help paying off the loan.

Executive Director Dianne Wassenich said the foundation hopes to obtain grants to cover the cost. She argues that once the foundation has the support of the city, it will be easier to receive grants.

“The city would get [the land] at almost no cost, and it would be a great advantage and a legacy for the future that people would think you were very wise to have done before the place exploded to double 72,000 [San Marcos residents],” she said.

Wassenich told council Sept. 19 if the foundation defaults on its loan to the Conservation Fund, the organization could seize and sell the property, and some light development, such as a few houses, could be built on it.

She told Community Impact Newspaper the foundation previously tried to sell one of the tracts, consisting of 75 acres, to private developers, but the purchase fell through twice.

“It has to be a very specific buyer who is very conservation-minded,” she said, adding if the city owns the land, it can be used as public green space.

According to San Marcos city code, properties located in the Edwards Aquifer Recharge Zone are limited to a total impervious cover of 20 percent, meaning only 20 percent of the ground can be built upon. Development is subject to city detention regulations, which prohibit an increase in peak flows from the properties for two-, 10-, 25- and 100-year rainfall events, and development that discharges into a floodplain requires an analysis to show no impact on upstream and downstream properties.

According to city records, only three properties located around Sink Creek and Spring Lake were affected during the 2015 floods, receiving 0-6 inches of water in a structure or damage to air-conditioning units.

“You can’t just say that buying this piece of property is going to keep the city from flooding,” Thomaides said. “It doesn’t work that way. I would love to have all the money that we need to buy all that property, but we don’t, especially after we just finished probably the tightest budget that I can recall in many years.”

“We just don’t have the funds,” Council Member Melissa Derrick said at the Sept. 5 meeting, when council came out of executive session to discuss the possibility of applying for the TWDB loan. “I would love to be able to enter into an agreement for a loan to purchase all the property that we possibly can that’s in a recharge feature or on the river, but we [are] just too challenged with our funding this year.”

Council Member Lisa Prewitt said she was also concerned about maintaining the land once it was in the city’s hands.

“We have a hard time even coming up with the numbers to maintain the green space that we have currently,” she said.

Two weeks later, the loan proposal was back on the table, and this time, council voted 5-1, with Mayor John Thomaides dissenting, to move forward with the application.

Prewitt, who called the potential land purchase a “huge legacy” for the city, said she voted to move forward with the loan application and to buy the city more time to consider the property in the broader scope of land acquisition.

“We have to have a bigger plan in place,” she said, adding she wants to discuss funding mechanisms for a broader land-acquisition plan with council in the future.

Both Prewitt and Derrick pointed to Houston as an example of what happens when a city fails to plan for future growth in relation to land preservation for flooding mitigation.

They also said past San Marcos city councils have not made land acquisition for flood mitigation a priority.
“I’d like this city to begin protective land acquisition in earnest for the future of our river and the city as a whole,” Derrick said.

How much the city would have to pay for the river foundation land cannot yet be determined. Although the TWDB loan is for $4.4 million, if approved, the city could receive up to 45 percent loan forgiveness through various programs. In addition, any grant money the SMRF receives could be applied to the TWDB loan in the future.

Thomaides said he would only consider contributing a small amount of the city’s money to the land purchase.

“It would have to be a fantastic deal,” he said. “We literally have not budgeted one dime next year for this expenditure.”

Derrick said the city is not in as much “financial pain” as made out to be and if necessary, a project from the city’s 10-year Capital Improvements Plan—which focuses on infrastructure and facility projects—could be pushed back a year for the land purchase.

“We could pull something off the CIP plan that was not urgent and does not involve the health, safety and welfare of our city,” she said. “Our priorities can change for things that are not absolutely needed.”

Thomaides said the city has already purchased 250 acres for preservation this year around the Purgatory Creek Natural Area and is negotiations to buy another 350 acres in the Upper San Marcos Watershed by the end of the year for millions of dollars. He did not disclose the exact cost of the land purchases.

Laurie Moyer, the director of the city engineering and capital improvement department, said the city can expect an answer on whether the TWDB loan application is approved by November.

Staff will come back to council with the status of any grants made available in December or January.
SHARE THIS STORY