Demand for solar systems quadrupled as Central Texas residents searched for ways to avoid black outs and calls for reduced power usage from the Electric Reliability Council of Texas, or ERCOT.

In recent weeks, ERCOT’s calls for reduced power consumption and rolling blackouts due to heat waves once again led some residents to examine alternative sources of electricity and methods of independence from the power grid.

“Whenever it started getting hot, we started seeing ERCOT in the news again. The same statements were being made about conserving energy, [and] immediately I started seeing [increased] demand again,” said Derrick Hoffman, a co-owner of solar installer HESOLAR in Buda.

The surge in inquiries into these systems began after February’s winter storm left tens of thousands of Hays County residents without power for several days while utility companies scrambled to restore power, he said. 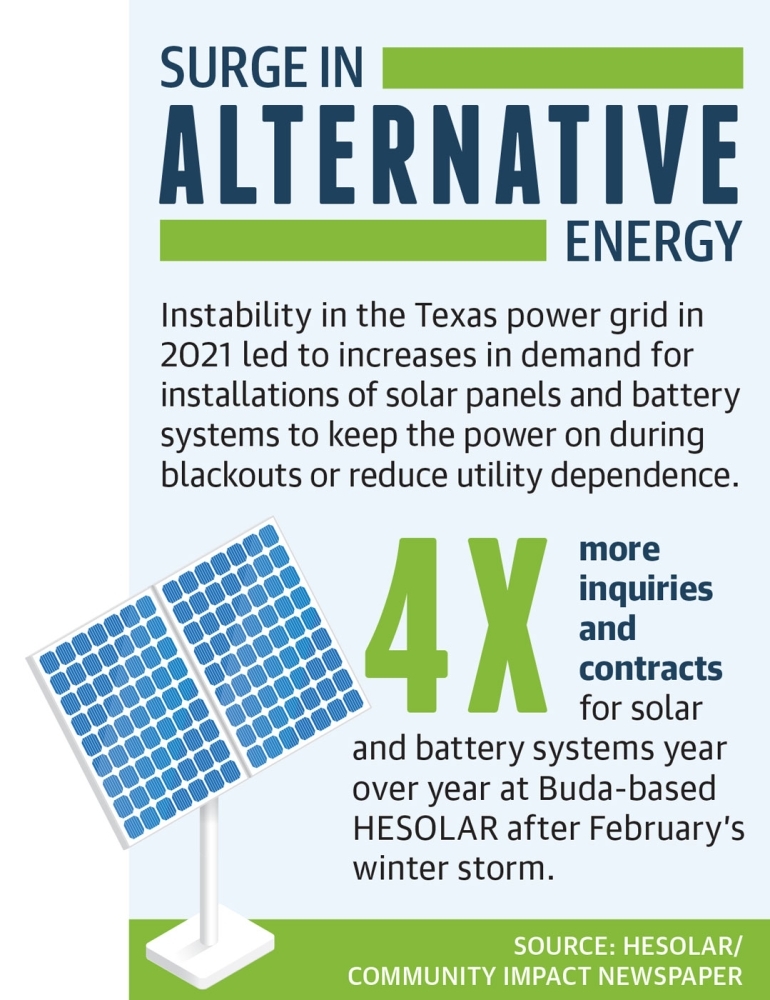 “I just had to increase the amount of meetings I could have per day just to keep up and not leave people waiting,” Hoffman said.

The cost of solar and independence

San Marcos resident Clayton Hartley had 28 solar panels installed in January 2020 and was able to ignore ERCOT’s recent calls to cut power consumption, all while feeling good about his family’s carbon footprint because they generated their own power during peak hours, he said.

Additional power production means Hartley’s system could recoup its cost within seven years instead of 10.

However, Hartley lost electricity just like many of his neighbors during the snowstorm.

Sean Taylor of Texas Solar Guys, which is based in Buda, noted homes with solar panels do not avoid outages unless a backup power system is also installed. Batteries charged during the day can also power a home at night.

“As long as the sun’s out, batteries can operate and recharge from the solar, so you have a continuous infinite energy system,” Taylor said.

Due to the cost, Hartley and his wife still have minimal interest in installing a battery system for rare events, such as the winter freeze, but he said they may consider it if such events become more common.

Interest in backup batteries on new installations has increased, though, Taylor said.

“Typically, in this area I wasn’t getting requests for a battery system; it was few and far between,” he said. “But since that winter storm ... pretty much every [solar] system is quoted with a backup as an option.”

Despite the monthly utility savings, Realtor Eric Johnson of Keller Williams Heritage, who sells homes across the region, said solar systems should not be considered for a home’s resale value.

“Your decision to do it shouldn’t strictly be financial because I don’t think the benefits are there yet,” Johnson said.

Solar systems can be seen as a perk, but do not necessarily lead to closed contracts, he said.

Part of the challenge of selling a home with solar panels are the strings sometimes attached. Many solar systems are financed, and the loan is typically transferred to the new homeowner. 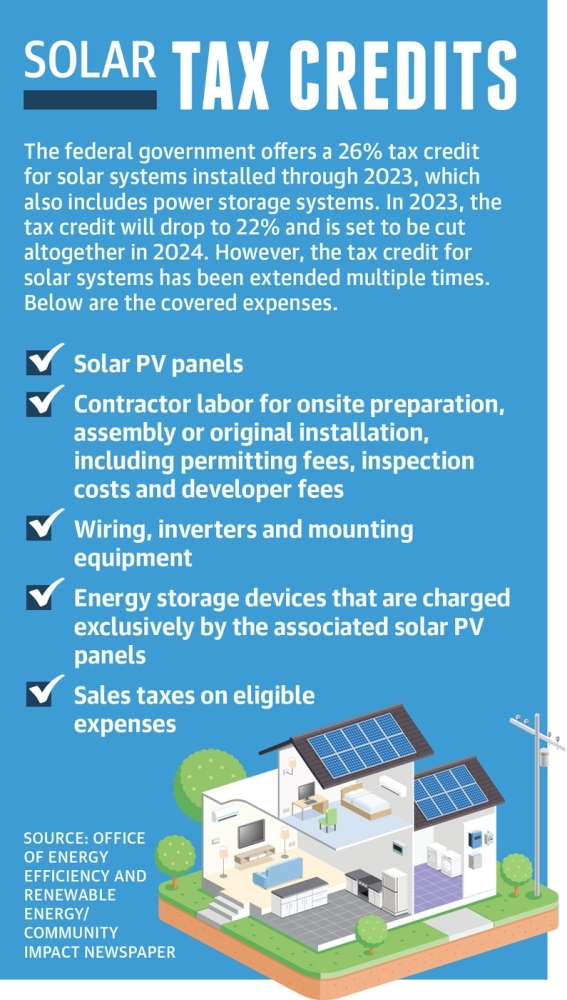 The average cost of a 5 kilowatt, or kW, solar system in Texas is $14,700, according to HESOLAR’s website. Backup batteries can double a system’s cost.

“I don’t think anyone that wants solar and batteries is going to be able to even start out under $20,000,” Hoffman said.

Residents can have significant savings on the upfront investment, though. Through 2023, the federal government offers a 26% tax credit on solar systems, which comes out to $3,822 on an average 5-kW system. However, this credit only benefits those who owe money on their income taxes.

Some municipal utilities, such as San Marcos Electric Utility, offer additional benefits, including a rebate of up to $2,500.

However, there is a new challenge for Hays County residents considering solar, with one utility altering rates for customers locked into solar investments.

On Dec. 18, the board of directors of Pedernales Electric Cooperative, which provides energy to most of Hays County with the exception of San Marcos, voted in favor of new rates targeting at least 4,443 solar customers.

In addition to PEC’s increased rates, which go into effect at the start of 2022, one-time application and connection fees totaling $650 would be added for new solar customers. 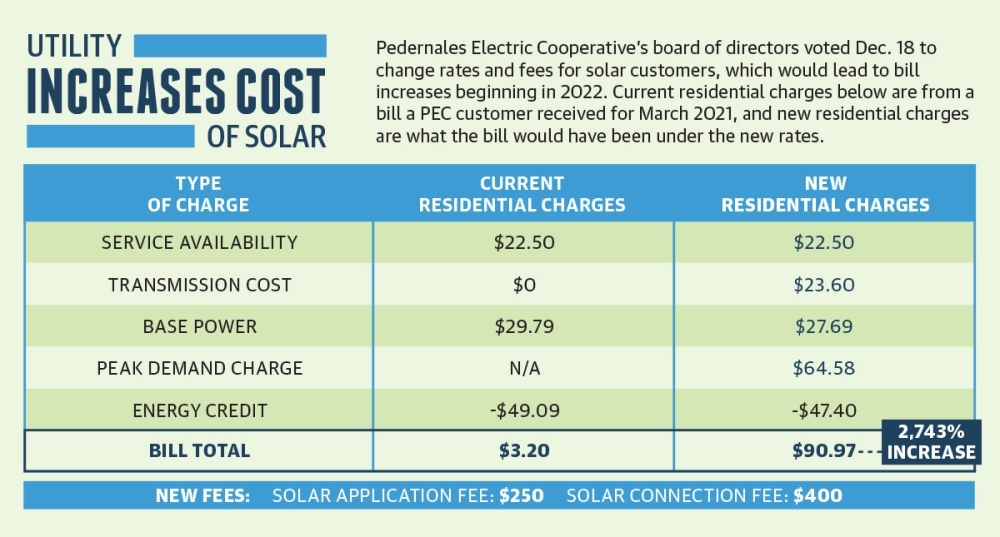 “They really kind of swiftly introduced a new rate structure for solar members ... and pretty much nobody was aware of it,” said Hoffman, who is a PEC customer.

PEC noted in a statement it held three virtual town halls with members and met with solar installers. Hoffman, who is both of those things, said he and many other members did not become aware of the new rates until several months after the vote.

A spokesperson for the cooperative declined to comment on how many customers or installers attended the town halls. Following backlash, the board plans to revisit the changes during its July 16 meeting.

In a news release, FSP, which installs solar in the co-op’s territory, presented a bill for an existing PEC customer with solar who would have seen their monthly bill increase from $3.20 to $90.97 in March under the 2022 rates.

New time-of-use rates are broken into five categories, with additional peak demand charges. If a PEC customer’s solar system goes offline during a hot day, forcing them to draw from the grid, bills could skyrocket.

An April PEC presentation shows revenue was 17% less than its cost of service for solar customers in 2020, but the bills presented by FSP show a disproportionate increase in charges. The utility’s spokesperson declined to comment.

They also declined to answer questions about the energy solar customers put back into the grid, for which they receive a credit, and how it affected PEC’s overhead.

The bill FSP presented showed a PEC customer put 434 more kilowatt-hours back into the grid than they received from the co-op.

Shelling out green to be green

Not every solar customer creates more energy than they consume, though. Hartley has no expectation of his system ever producing more than his family uses.

For some solar users, the appeal goes beyond monetary savings.

“We’re always trying to look for ways to reduce our carbon emissions,” he said. “My wife and I are both interested in climate change and the effects of it ... and that’s just something that we consciously do.”

Despite not seeing a benefit to a home’s resale value, Johnson still praised the environmental perks.

“If you choose to do it to be a good steward of our natural resources, I think there’s a lot of added benefit or positive feelings about that,” he said. “There’s absolute goodness in doing it.”