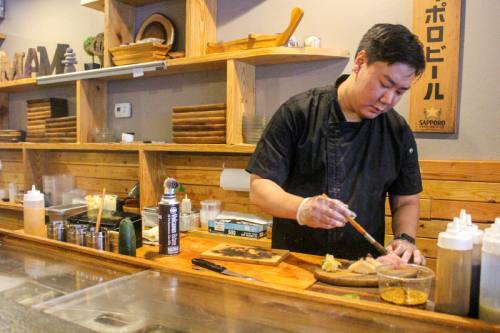 Umami Sushi owner David Lee puts the finishing touches on a seared scallop and yellowtail nigiri behind his sushi bar.

Before he dove into the world of sushi, David Lee, the owner of Umami Sushi, was working as a general manager of a store for a cellphone company.

“I was getting paid really good, but there was no joy—no growth—for me,” Lee said.

Lee opened his San Marcos restaurant in March 2017, but not before he made his bones working in Austin’s sushi scene.

He said the best part about being the captain of his own ship is that he can be creative.  And because he is in charge of ordering ingredients, Lee said he is free to try different ideas.

“I can do what I want how I want to do it,” Lee said. “Being your own boss kind of helps you spread your wings.”

Lee serves fusion-inspired sushi rolls such as the Bobcat Roll and the Umami Roll, two popular choices on the menu, but he also prides his business on its more traditional feel. He said the restaurant’s size, along with its layout, provides a more intimate setting where he can take time to build friendships with his customers.

The opportunity to have more meaningful conversations with his patrons, Lee said, is not something he had at other, larger high-volume sushi restaurants.

“You say things to keep them company, but you don’t really get to talk to them,” Lee said. “Here, people are really into socializing and finding out more about what we do.”

Though he has been challenged in summers and winters by the typical “boom-and-bust” cycles of restaurants in college towns, Lee said he enjoys seeing students create memories and helping the people embrace the art of sushi.

For now, Lee said he is content with being located across the street from the Texas State University campus.

“If the opportunity presents itself, I wouldn’t mind moving, but the way we’re going right now, I’m pretty happy with where we’re at,” Lee said.