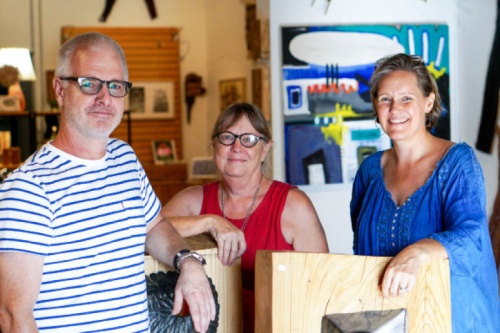 From left: Kevin Huffaker, Margaret Adie and Christine Terrell are three of the artists who co-own the gallery.

Tucked away in a 19th-century building, 218 Co-op Gallery sits less than a block from the downtown square in San Marcos. The building was home to a photography studio at the start of the 20th century, and it has now returned to its artistic roots, displaying the works of nine local creators.

“It was a lot of work for Steve and me to keep the studio open alone,” Huffaker said. “But we didn’t want to close it and see it become a restaurant; we wanted to keep art in the community.”

The only official artist cooperative in the area, Huffaker said they went through a lengthy process to become a state-designated cooperative. Now nine artists are all equal co-owners, sharing the expenses and profits.

Large wooden sculptures, found-object sculptures and photos line the exposed brick walls, while handmade jewelry, whimsical ceramics and postcards fill in the shelves around the gallery. A little red table and chairs provide seating for visitors who want to relax in the space, while just outside, music drifts over from neighbor KZSM Radio.

In 2016, Huffaker joined with two other galleries to create a monthly event, which by January 2017 had evolved into the Third Thursday Downtown Walkabout and has now become a tradition.

“We hope to be a community resource,” artist Christine Terrell said. “It’s about getting people in here, getting kids in here, too, exposing them and getting them comfortable with art.”

Huffaker said the goal is to inspire art within the community. Written into the co-op’s bylaws is a community enrichment fund to help further the goal, whether through grants, guest artists, or art days for children. Huffaker said travelers and visiting artists say that it is a world-class co-op gallery.